Why Is Rick Berman Attacking Chipotle? 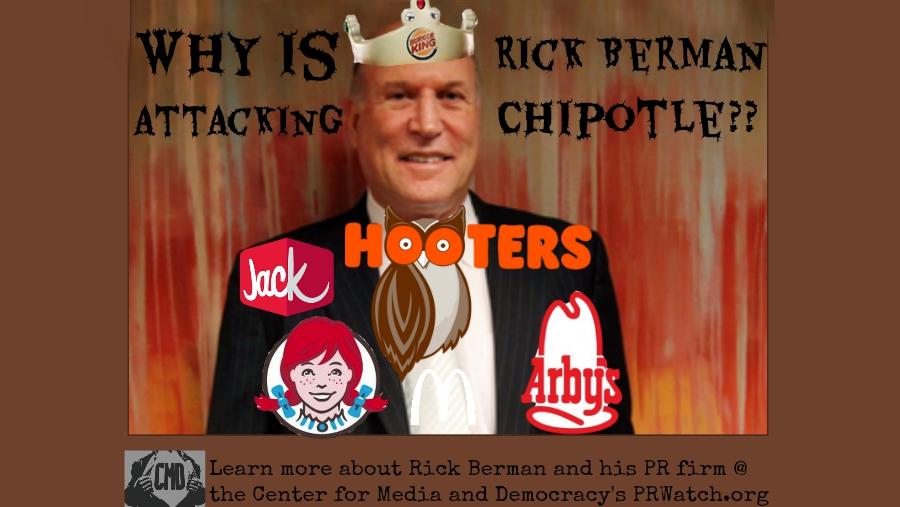 The profits of the fast food Mexican-style burrito company--which promotes whole foods over heavily processed factory food-type products--have surged while competitors like McDonalds and Burger King have tumbled. Chipotle has drawn a line in the sand on GMOs with its "G-M-Over It" campaign, as Americans' concerns about genetically modified foods are growing.

Berman told investigative reporter Anna Werner of CBS News that no client specifically asked him to run this new ad campaign against Chipotle.

As the Center for Media and Democracy has previously documented, Berman's modus operandi is to promise the corporations and industries who fund his work that he will keep their names out of it (listen to audio below).

Either way, one of Berman's tactics is to attack opponents so that clients or donors don't have to get their hands dirty as they manage the image of their brands. And he has gotten very rich in the process.

Berman's Center for Consumer Freedom is just one of several non-profits managed by Berman that have this kind of arrangement.

CBS News interviewed the Center for Media and Democracy's Executive Director, Lisa Graves, about Berman's history of profiting big from his non-profits through the arrangement he makes with himself for management fees. As CMD noted, Berman's mission is to do PR attacks that help the corporations whose millions in donations and payments have gone into his coffers.

CMD's SourceWatch.org site notes that Berman's PR operations have been tied to a number of fast food companies in the past--including Burger King, Wendy's, Arby's, and Jack in the Box, as well as trade groups representing those industries. Although Berman's latest attack ads accuse Chipotle's food of being fattening, the corporations he's fronted for in the past are known for very high-calorie foods, including chains like Hooters, which specializes in deep-fried chicken wings and more.

Berman is over a decade late in expressing "concern" over calories. Morgan Spurlock's "Super Size Me" documentary from 2004 is still tied in many consumer's minds with McDonalds. And, among other things, Berman fought hard against efforts to regulate the size of high-calorie sodas in New York City just a few years ago.

Attacks like the one on Chipotle are part of Berman's stock in trade. He's also running ads attacking efforts to increase the minimum wage. He has also repeatedly attacked factor-farming opponents, particularly the Humane Society, which has responded to Berman's attack on Chipotle here.

And, late last year, Berman was caught on tape in audio provided to CMD last fall telling oil and gas companies how he could attack their environmental opponents, like Greenpeace and Sierra Club, for them.

Here is an excerpt from CMD's PRWatch article by Lisa Graves about Berman's PR pitch to energy corporations, which reveals a kind of Ten Commandments from the Dr. Evil playbook:

1.  "Screw" your enemy. Berman boasted about his obsession with unions and his attack on their efforts to raise the minimum wage for American workers: "I get up every morning and I try and figure out how to screw with the labor unions." Listen to this clip here.

2.  "Marginalize" your opponents. Berman described his tactics against public interest groups: "wherever possible I like to use humor to minimize or marginalize the people on the other side." Listen to this clip here.

3.  "Demolish the moral authority" of powerful public interest voices: "I got George McGovern to come out and say that unions were wrong. I represent some alcohol companies, I got Candy Lightner, who started Mothers Against Drunk Driving, to come out and say that MADD was overreaching and that she endorsed our position, our client position, rather than the MADD position. That is a demolishing of moral authority." Listen to this clip here.

4.  "Make it personal." Berman's associate Hubbard described how they go after concerned citizens who dare to challenge their clients: "we do have a section on every single activist. Their rap sheets, their criminal records they have. We're really making this personal. We're trying to make it so they don't have any credibility with the public, with the media, or with the legislators." Listen to this clip here.

5.  "Brand" whole movements as "not credible." Berman & Co. detailed their game plan to try to marginalize people concerned about fracking, as noted by Bloomberg media: "what we wanted to do is that we wanted to brand the entire movement behind this as not being credible, and anti-science." Listen to this clip here.

6.  Being "nasty" wins. Berman shakes off concerns that his activities are too nasty or aggressive, saying "you can either win ugly or lose pretty." Listen to this clip here.

7.  Push "fear and anger." Berman talked about pushing people's emotional buttons on fear, love, anger, greed, and sympathy, stating: "you could not get into people's heads and convince them to do something as easily as you could get into their hearts or into their gut to convince to do something. Because, emotions drive people much better than intellectual epiphanies." Listen to this clip here.

8.  Treat public policy as "endless war." Berman recognized that the public interest groups are appealing to the American people: "If you think about it these groups, the Sierra Club, who is the natural enemy of the Sierra Club? Who is the enemy of Greenpeace? You know at the surface, you would love to be a group like that because everyone should be in favor of you, who could be against you? That's very difficult to over come and they play on that, and they trade on that, and that's our opportunity and also our challenge. So it is an endless war." Listen to this clip here.

9.  Give corporate cash "total anonymity." Berman reassured his audience that he can keep their role in these tactics secret: "We run all of this stuff through nonprofit organizations that are insulated from having to disclose donors. There is total anonymity. People don't know who supports us. We've been doing this for 20 something years in this regard. And to the degree to anybody is concerned about that I will tell you there are all sorts of ways, all sorts of firewalls that have been established to get this done on an anonymous basis." He added: "I am religious about not allowing company names to ever get used. At least I'm not going to allow them to get used. And I don't want companies to ever admit that because it does give the other side a way to diminish our message." Listen to this clip here.

Meanwhile, Berman and Co. routinely tries to label opponents n the public interest communities as "hypocrites" whenever possible even as he goes to great lengths to hide the money trail between him and his clients. His attack on Chipotle is another variation on this theme, without apologies for the tobacco, alcohol, and fast food companies he has had long relationships with.

CMD is also one of the groups targeted by Berman and his allies in recent months. Their primary attack is about a check CMD received from a Schwab donor whose name is unknown to CMD. In contrast, Berman's major donors who fund his PR attack machine are well known to him, but not to the public.

I don't know why Rick Berman just didn't attack Chipotle with its own truths. Chipoltle's entire "G-M-Over It" campaign is nothing but clever greenwashing, which CMD should be exposing for the fraud that it is. Chipolte's own website states that they use non-GMOs 'when possible' -- hardly G-M-Over It. Additionally, site visitors can get to the word "organic" in nothing less than 3 clicks buried deep in the site, with includes only 8 sometimes organic ingredients. The unquestioning sheeple flock to the alter of Chipotle for nothing more than clever marketing, and for which they will pay handsomely for cleverly branded corporate, industrial food.
Faye just did exactly what Berman lists. Sounds like the trolls are trolling CMD (no, we're not surprised). Berman is attacking Chipotle because people like Jack-in-the-Box pay him to. That's the worst evil: getting paid for it. Good thing Kharma's a bitch.