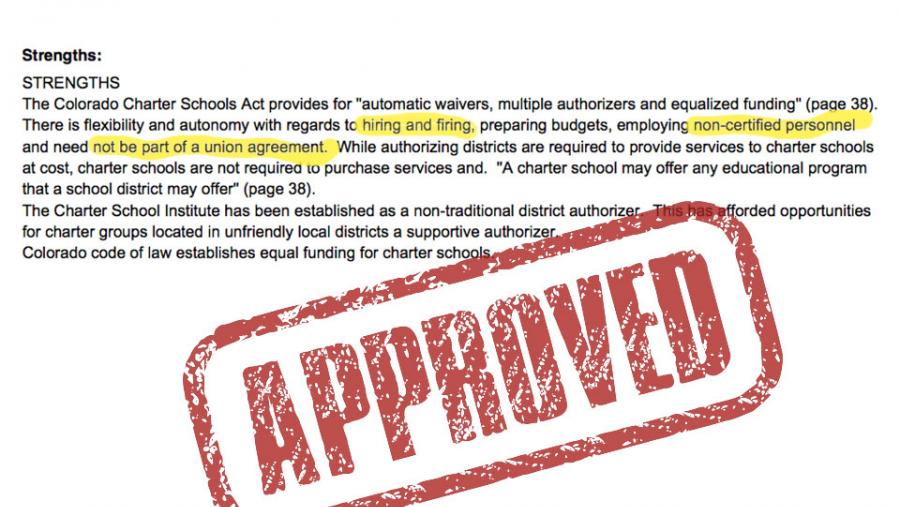 Between 2010 and 2015, the U.S. Department of Education (ED) awarded Colorado $46 million under the Charter Schools Program. Part of the reason the state landed the competitive grant was that charters are free to hire unlicensed teachers and then fire them at will, documents reviewed by CMD show.

Designed to create and expand “high-quality” charter schools, the quarter-billion-dollar-a-year program has been repeatedly criticized by the watchdogs at the department's Office of the Inspector General for suspected waste and poor financial controls.

Two weeks ago, CMD revealed that there are currently nationwide probes underway into closed charter schools and the “lack of accountability” within the program.

As Congress stands poised to reauthorize the program—and quite possibly expand it by 48 percent—ED has deflected all criticism. It has told stakeholders that while it has stepped up its monitoring activities and efforts to hold states accountable, it is mainly “the responsibility of states to make sure they develop and submit plans” to ensure that the federal millions end up in classrooms rather than missing in action.

Well, do they? CMD continues its investigation by taking a closer look at the reality on the ground. First out is Colorado.

When Colorado applied for the competitive grant in 2010, four out of five reviewers contracted by ED to score the application raised concerns about the lack of oversight and accountability, especially when it came to charter school authorizers:

But this was more than made up for by what the reviewers considered to be a strong plan for how charters would improve student achievement, and the “flexibility” charter schools enjoy under Colorado law. One reviewer, for example, enthused over schools having complete autonomy when it comes to “hiring and firing,” employing “non-certified personnel," and not abiding by union agreements.

The Schools of Choice Office (SOC) at the Colorado Department of Education is responsible for managing the CSP grants by vetting the charter schools applying, and by making sure that those awarded money comply with federal guidelines during the whole grant cycle. The Office is also tasked with developing guidelines for charter school applications, and with collecting and compiling data on school performance.

CMD’s review of emails obtained through an open records request does not, however, show an independent agency judiciously reviewing grant applications as much as an office rewarding grants on a whim, and pushing for even less accountability

When schools submitted poor applications they were sometimes given a second chance based on the staff’s discretion: “The issue is not “the quality of their schools but the quality of the application,” Program and Grant Manager (now Director) Gina Schlieman wrote in a November 2013 email.

The emails also detail attempts to push back on the modicum of oversight that does exist. When lobbyists from the Colorado League of Charter Schools in a “confidential” December 2014 meeting discussed draft legislation that would pay lip service to accountability by requiring charter authorizers to submit annual applications, SOC Executive Director Gretchen Morgan would have none of it. “I think that is politically ridiculous, and also creates a giant bureaucratic process… I would go for a more robust process on 5 year cycles.”

No Payroll Process, No Problem

In 2013, Children’s Kiva Montessori in Cortez, Colorado, was awarded a $189,000 start-up grant under the CSP program. In October 2014, a former business manager at the school sounded the alarm in an email to the Colorado Department of Education: “I’d like to pass-on [sic] some thoughts on what criteria you want to consider when evaluating future charter school applications: Does anyone directing the school actually have some knowledge about federal and state employment laws?” he wrote. He then listed some of the violations he had encountered:

Gina Schlieman replied that this “is not typical or appropriate,” and went on to send an email to the Colorado League of Charter Schools as “potential feedback … to consider for your quality criteria document.“

The program manager with the Colorado League of Charter Schools wrote back, demanding that she rescind the statement “not typical or appropriate.” She later added: “some of this may not be out of the ordinary, especially depending on the exact wording that covers these areas contractually. Charters are always so interesting!”

The only action taken by the SOC was to amend the Quality Standards for Developing Charter Schools to specify that charter schools must have: “funds in place regarding tax, payroll, retirement, insurance and background check requirements.”

Is the situation in Colorado, where schools could receive hundreds of thousands under the Charter Schools Program even though they, allegedly, did not comply with "employment laws," the result of a state agency exploiting loopholes in the federal program?

Pinning the blame solely on the School of Choice office fails to take into account the fact that, for all their rhetoric on the states' responsibility to monitor authorizers and charters, ED officials knew perfectly well that Colorado had no statutory power to do so when awarding the grant. By their reckoning, the lack of accountability paled in comparison to—indeed, it might even have been a part of—the much-vaunted charter school “flexibility” the program was designed to foster.

Created as an amendment to the Elementary and Secondary Education Act in 1994, the purpose of the Charter Schools Program was to incentivize states where charters are exempt from democratic oversight and control—not only when it comes to deciding on a curriculum, but also in terms of student admission and discipline, and, as mentioned, "hiring and firing" policies.

In 2010, following President Obama’s reauthorization of ESEA, Secretary Arne Duncan pledged in a blueprint on school choice that charter schools receiving funding under the program would now be held to even higher standards of accountability than traditional public schools. This took the form of a new evaluation criterion, which asked states to submit a plan on how they would hold charter school authorizers accountable.

But as CMD revealed in a report published earlier this year, this new safeguard, which is flatly at odds with the original purpose of the program, was never more than a rubber-stamp rubric. States that allow charters to operate independently from locally elected school boards and without unionized or certified teachers (all under the guise of "flexibility") have the upper hand when applying for grants—accountability or no accountability.

With oversight outsourced to charter school authorizers, the state departments of education are reduced to conducting independent reviews of the applications, and to follow up by providing support and training to the authorizers in the hope that they will follow best practices. But the Colorado emails reveal major failures on both counts. Not only did officials with the Schools of Choice office ignore reviews on a whim, they also met frequently with the charter industry while arguing for even less accountability.

Once again, the situation in Colorado is symptomatic of failures endemic to the program. In the report, CMD revealed how ED reviewers considering the applications, as well as the company contracted by ED to monitor how states comply with the program requirements, are closely aligned with the charter industry—an industry that is fighting tooth-and-nail against transparency and accountability.

WestED, the company charged with monitoring the state implementation of the CSP grants, is also beholden to the charter industry. It receives a substantial part of its funding—$3,457,786 in 2014—from the Bill & Melinda Gates Foundation, which has pushed for an aggressive expansion of corporate charter schools.