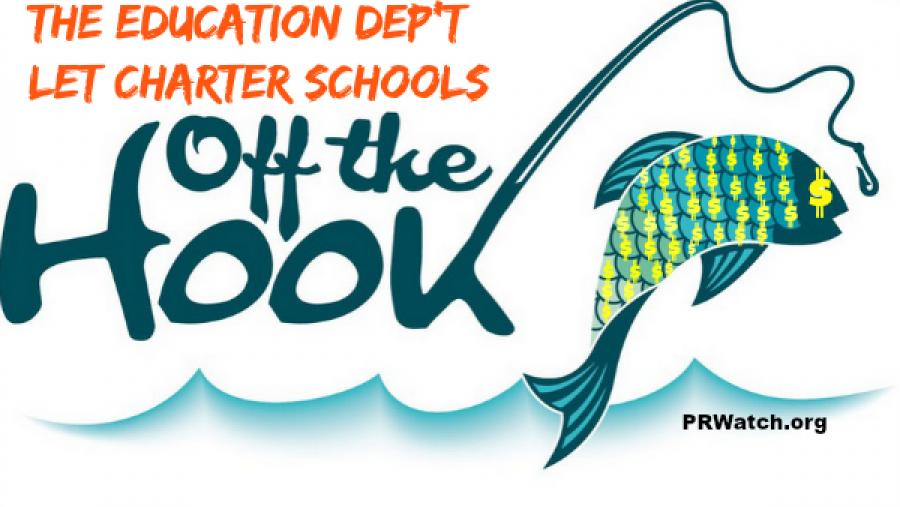 Earlier in this special report series, CMD revealed how states that do not hold their charter schools and authorizers accountable have the upper hand when the U.S. Department of Education (ED) evaluates applications to the quarter-billion-dollar-a-year charter schools program. But if the review process is deeply flawed, the oversight of the $3.3 billion disbursed within the charter schools program is not much better.

A scathing 2012 audit from the ED Office of the Inspector General (OIG), and recent documents obtained through open records requests, show that when faced with the conflict between ED’s pledges to hold the industry accountable, and the reality on the ground—the agency has often deferred entirely to the states.

Here are some details from the OIG audit and, as more recent documents obtained by CMD reveal infra, not much has changed.

Similarly, email communication from 2014 between the Charter School Office at the New York State Education Department and WestEd—a company contracted by ED to monitor how states implement federal charter school grants—reveals that the problem of biased school selection is endemic. Faced with a an on-site audit, the NY state officials recommended that WestEd visit six schools, not based on any suspected problems there, but because they were “logistically friendly from a travel perspective.” WestEd accepted this rationale.""

In the case of closed charters the lack of financial controls for federal dollars was absurd, as exposed by the 2012 OIG audit:

Amid concerns that ED still cannot account for where the money goes when schools close down, the OIG will complete a “Nationwide Audit of Closed Charter Schools” in 2015.

In response, ED held a training suggesting possible courses of action for SEA if no provisions of state law either “preclude or require” monitoring of authorizers. That is a pretty big “if,” after 20 years and over $3 billion.

While audits and on-site visits were conducted on a regular basis by WestEd, OIG determined that “WestED was not effective in determining whether SEAs were conducting effective oversight and monitoring.”

Yet, even the findings WestED provided to ED were too often not acted on in any meaningful way by ED’s Office of Innovation and Improvement (OII), which is the central part of the federal education bureaucracy that aids the expansion of charter schools. As OIG noted:

New Finding: Accountability? How "Overseers" Let Charters Off the Hook

CMD’s review of all of the state WestEd audits has found that the conflict between federal claims that SEAs hold the authorizers and charter schools accountable and state laws barring them from doing so (or not expressly granting them power to do so), crops up time and again.

Additionally, internal auditing records obtained by CMD under one of its FOIA’s explains what the “follow-up phone calls to grantees” entail.

After an October 2013 call to discuss the issue of authorizer accountability with the Texas SEA, the U.S. Department of Education’s Office of Office of Innovation and Improvement noted:

“Discussion topics included discussing potential technical assistance provided to authorizers and that this finding is not telling Texas to change law but to address what they can do within the confines of the law to try and strengthen authorizing, monitoring, and holding charters accountable across the state” (emphasis added).

In other words, when the accountability standards Education Secretary Arne Duncan pledged to uphold in 2010 clash with the on-the-ground reality, the states need not fear punitive measures as much as a forgiving discussion by phone from DC.

Similarly, Arizona and Florida were let off the hook with homework assignments. For example, OII noted that “Florida should provide a narrative describing their efforts as well as a brief summary of the authorizer activity outlined in their application and a timeframe for when that activity will begin, deliverables etc.” No further sanctions were imposed, according to the audit files.

Surprisingly, the audit records betray a lack of understanding of precisely how autonomous and exempt from state oversight charter school authorizers are.

Here’s case in point: the OIG insisted that Florida and Arizona laws do allow for SEAs to monitor authorizers. But during post-audit conference calls between the state departments of education and OIG and Charter Schools Program staff, including Director Stefan Huh, it became clear that this was not the case.

New Finding: ED Reviewers and WestED Have Close Ties to the Charter Industry

In all, it would take two years before the OII responded in any meaningful way to the OIG findings, and it did so by taking regulatory action in October 2014.

But this fails to convince for two reasons. First, when a different version of the accountability safeguard was added as a rubric in 2010, it became a rubber-stamp criterion. Reviewers waxed lyrical about how SEAs held rogue authorizers accountable for their failing charter schools even though the states, in fact, never monitored the authorizers, nor had any statutory power to do so.

Second, both the reviewers considering the applications and the company used to monitor state compliance are closely aligned with the charter industry—an industry that is fighting tooth-and-nail against transparency and accountability.

WestED, which was blasted by the OIG audit in 2012, is also beholden to the charter industry. It receives a substantial part of its funding—$3,457,786 in 2014—from the Bill & Melinda Gates Foundation, which has pushed for an aggressive expansion of corporate charter schools. In addition, the composition of WestEd’s board of directors raises similar concerns about independence from the industry. Board member Steve Canavero, for example, also serves as treasurer for NACSA (National Association of Charter School Authorizers), an organization with a track record of fighting against democratic oversight of charter school authorizers.

This is the fourth instalment in a CMD special report on waste and lack of accountability in the quarter-billion-dollar-a-year federal chart schools program. Click here for part 1, part 2, part 3 and part 5. This serialized version expands on the original report as new findings have come to light.