Why Is the FBI Spying on KXL Activists? | PR Watch

Why Is the FBI Spying on KXL Activists?

Big Brother: a joint production of TransCanada and the FBI

If you spend any significant amount of time advocating and rousing rabble against dirty corporate shenanigans and reckless government policies, you sort of take it as a given that someone's got a file on you somewhere. If you're a regular on the protest circuit, there's a pretty good chance that you've been sized up in what the cops call "threat assessment." Which means they think you might be up to no good, and they want to get a bead on you before you do something.

Some people might call this proactive policing, getting the drop on potential troublemakers before they can make trouble. Others might call it a violation of the First Amendment rights to free assembly, free speech, and petitioning the government. When you're engaging in lawful, Constitutionally protected political speech, knowing that your government is treating you like a criminal is as hurtful as it is offensive.

And so it is for opponents of Keystone XL, who learned this week that the FBI, in violation of its own rules, has been spying on them.

Tuesday, the U.K.-based news outlet The Guardian reported on its findings from a Freedom of Information Act request on federal investigations into the political organizations opposed to the controversial pipeline. What it uncovered is troubling. 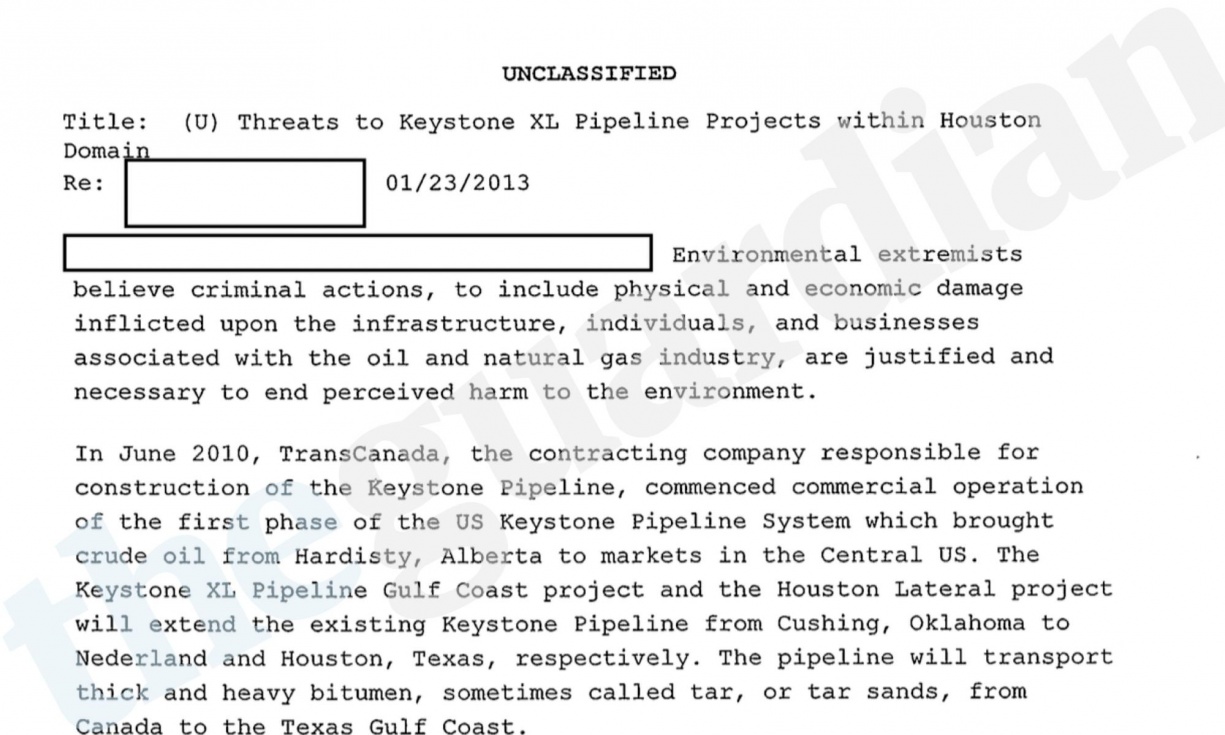 The 80 pages of documents delivered in response to the FOIA request show the FBI tracked demonstrations and recruited at least one informant, and focused of Tar Sands Blockade, the Texas-based organization that's taken non-violent direct action, like chaining themselves to bulldozers, to hinder pipeline construction. They and other groups were slapped with some seriously dangerous labels, notably, "Environmental extremists [who] believe criminal actions, to include physical and economic damage inflicted on the infrastructure, individuals, an businesses associated with the oil and natural gas industry, are justified and necessary to end perceived harm to the environment."

More troubling still, Paul Lewis of The Guardian reports that the agents from the FBI field office in Houston who conducted the unauthorized investigation did so only after meetings with TransCanada. According to Lewis:

The FBI files appear to suggest the Houston branch of the investigation was opened in early 2013, several months after a high-level strategy meeting between the agency and TransCanada, the company building the pipeline.

For a period of time – possibly as long as eight months – agents acting beyond their authority were monitoring activists aligned with Tar Sands Blockade.

Environmental activists affiliated with the group were committed to peaceful civil disobedience that can involve minor infractions of law, such as trespass. But they had no history of violent or serious crime.

We have noted previously that TransCanada has a history of smearing its political opponents as extremists, and in fact has encouraged local law enforcement to treat them as terrorists. One such effort was aimed at Bold Nebraska, friends of PipeLIES Exposed who have so far been very effective at using the legal system to block TransCanada's attempts to seize private land for foreign corporate profits. 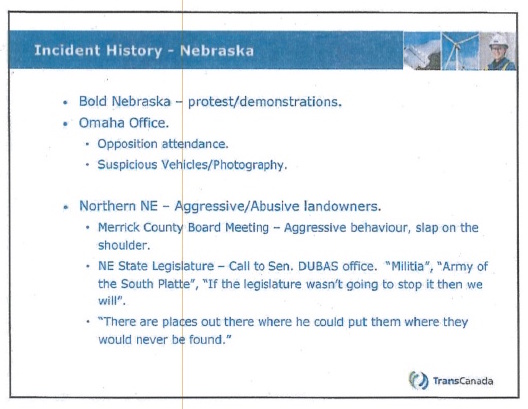 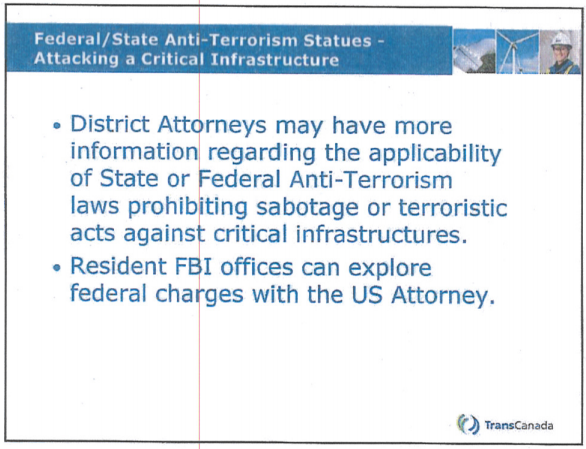 There's evidence this sort of thing has become standard operating procedure for pipeline companies. In November 2013, the Vancouver Observer reported that Prime Minister Stephen Harper's Conservative government in Canada colluded with Enbridge--the pipeline folks who gave us the Kalamazoo River spill and now want to expand a tar sands pipe in Wisconsin--to spy on political and aboriginal groups in connection to the Northern Gateway project.

That sort of shady, black-bag work helped spur widespread opposition in Canada to Bill C-51, the domestic spying law passed by the House of Commons this week that allows secret, unaccountable investigations that threaten to trample civil rights, particularly those of political activists and First Nations opposed to tar sands exploitation.

(Government surveillance for corporate clients is not limited to the oil business. The Center for Media and Democracy, which funds PipeLIES Exposed, detailed extensively the collaboration of anti-terrorism investigators and corporate security to monitor and infiltrate the Occupy movement in 2011 and 2012, including the sharing of private information about individual protesters. (Disclosure: I helped edit the report.)

It's that imprudent, distasteful meshing of civilian law enforcement and corporate interests, with political activism marked for surveillance, that many targets of the FBI investigation find most upsetting.

"When our government works hand-in-hand with Big Oil to spy on hardworking farmers and moms, there is a clear and fundamental problem that we must address," says Bold Nebraska's director Jane Kleeb. "We call on President Obama to investigate the relationship between a foreign oil corporation--TransCanada--and the FBI so we know how our tax dollars are being spent."

Kleeb makes a very good point. We need an investigation of those agents and an accounting for how they were able to engage in domestic espionage of political activists without their bosses' knowing about it.

I would be particularly interested in finding out how the Houston office of the FBI made the political assessment, as it noted in its report on its improper investigation, that "The Keystone Pipeline, as part of the oil and natural gas industry, is vital to the security and economy of the United States."

That's a conclusion that even their top boss, the President of the United States, has yet to reach. Perhaps that's only because he didn't get his marching orders in a private meeting with TransCanada.

I am continually baffled why our congress continues to work against the American public by allowing confiscation of private lands in order to satisfy the greedy oil creeps from a foreign country. There are so many corporations in our country, namely big oil, big pharma, banking and insurance. These people don't ever seem to be inclined to be a part of the public good for common sense solutions to everything happening in our lives. Their only apparent interest is to make so much money at all our expense so they can do whatever they wish. Our congress continues to support that notion plus helping our Canadian neighbors. Give us a break. This madness has to stop.