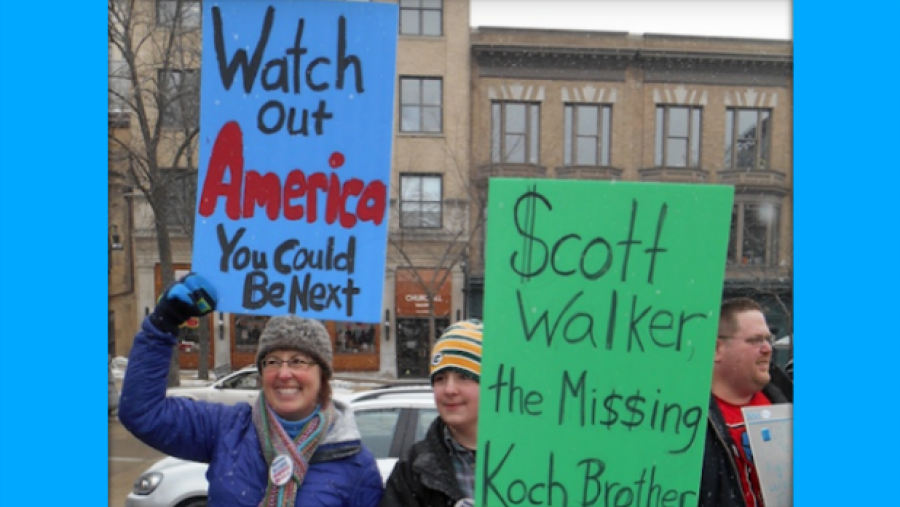 By Brendan Fischer and Mary Bottari

In an October 2014 campaign ad, released just a few weeks before election day, Scott Walker looked directly into the camera and told voters, "I support legislation to increase safety and to provide more information for a woman considering her options." He said a bill he supported "leaves the final decision to a woman and her doctor."

But this week, Walker announced that he will sign a bill banning abortions after 20 weeks--an extreme limitation that may run afoul of Roe v. Wade--taking the decision away from a woman and her doctor, even when her health is at risk.

Walker is gaining a national reputation as a straight-shooter. “He has a plain-spoken way that is totally relatable. He says what he's going to do and does it,” Mark Block recently told Bloomberg News. Block ran the Koch-funded Americans for Prosperity chapter in Wisconsin during Walker's first gubernatorial run. The same theme was repeated by pundits and commentators at the Conservative Political Action Conference (CPAC). And Walker himself is not shy to toot his own horn.

"Voters want leaders who are going to spell out what they're going to do and then have the courage to act on it," Walker recently told Fox's Sean Hannity.

But the truth is that Walker has consistently neglected to “spell out" what he would actually do when elected.

"We're not going to do anything with right to work," Walker told the New York Times in October, echoing public statements he had made for years.

But on Monday, Walker will sign right to work legislation that was lifted word-for-word from an American Legislative Exchange Council "model." He even boasted about the measure at CPAC. This reversal earned him a "full flop" on Politifact's flip-o-meter.

This is nothing new. Just weeks into his first gubernatorial term, Walker proposed the legislation that has defined his political career, the anti-union Act 10. Yet he never spelled out that he would go after unions on the 2010 campaign trail.

In fact, Walker pledged that he would do the opposite: one week before the 2010 election, he told the Oshkosh Northwestern editorial board that he would actually negotiate with public sector unions.

After the introduction of Act 10, Walker claimed that he gave voters fair warning. In February of 2011, one week after the controversial bill’s introduction, he said that "I campaigned on (Act 10) all throughout the election. Anybody who says they are shocked on this has been asleep for the past two years."

Politifact called the claim “false.” Even Walker’s supporters couldn’t come up with a single instance of Walker stating during his campaign that he would end a half-century of collective bargaining for public employees. Walker only spoke the truth when he was on the line with a prank caller pretending to be David Koch. He described the introduction of the anti-union legislation as "dropp[ing] the bomb" on Wisconsin workers.

Most recently, after introducing his executive budget bill with great fanfare and a long speech, Walker failed to mention that he was slashing “the search for truth” and the Wisconsin Idea from the University of Wisconsin mission statement. The edits created a firestorm of controversy and his “drafting error” claim was undermined by evidence that his office specifically requested the changes. He received a full "pants on fire" for that move.

While Walker tries to build a national reputation as a straight shooter, the facts paint a picture of a politician governing by "bombshell."