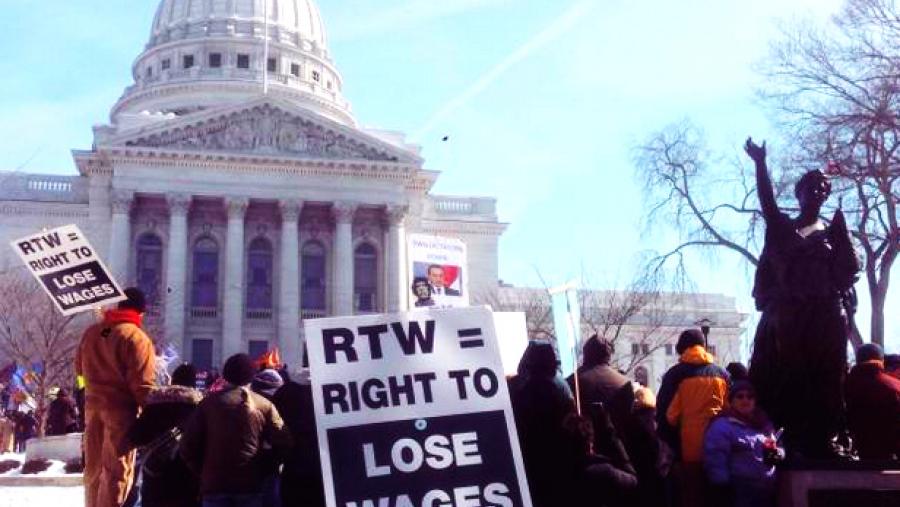 Wisconsin’s American Legislative Exchange Council-inspired right to work measure seems destined to become law, despite hours of testimony in opposition and a growing number of reports showing that claims about the law’s benefits simply are not true.

As right-to-work (RTW) was fast-tracked through the legislature this week, ALEC legislators were pushing a series of talking points about how the anti-union measures will be a boon to the state's economy, relying on the questionable research of ALEC scholar Richard Vedder.

Vedder claims that incomes in Wisconsin would be $1,600 per year higher if the state had enacted RTW thirty years ago. If that sounds like a stretch, it is. The leading study on the economic effects of right-to-work, from Elise Gould and Heidi Shierholz (who is now Chief Economist at the U.S. Department of Labor), found that wages in right-to-work states overall are $1,500 lower. Among the problems in Vedder’s study is his focus on personal income, which combines the stock market gains and other income sources of the very wealthy with the ordinary wages most people live by.

While the legislators were all too eager to embrace the suspect claims of an economist-for-hire, they are equally anxious to blast the work of local academics, who know a thing or two about the Wisconsin economy.

Steve Deller, a UW-Madison applied economics professor who studies the changing economic landscape in Wisconsin, recently developed a factsheet showing that workers in manufacturing earn some $8,000 less in right to work states than in Wisconsin. He also noted RTW states have higher poverty rates and a lower proportion of the population over age 25 with bachelor’s degrees.

As for economic development, Deller concluded, “Right-to-work laws really do very little” and are “more symbolic than an actual economic growth and development policy.”

These findings prompted Sen. Steve Nass (R-Whitewater), a longtime ALEC legislator, to blast the analysis in an email sent to Wisconsin legislators and UW system officials and obtained by The Isthmus.

"Attached is yet another example of wasted resources at the UW-Madison/UW Extension to issue a trumped up report from a partisan academic against Right to Work," Nass wrote. "Hiding behind academic freedom to issue partisan, garbage research is what we have come to expect from some of the overworked and stressed faculty at UW-Madison."

Professor Deller, who told a UW student newspaper he does not think RTW is “either good or bad” for Wisconsin, said the Senator appeared to be shooting the messenger.

"If we filtered everything that came out of the university based on whether or not it's going to pass through some political lens, then why are we here?"

Similarly, the Koch-funded infrastructure took aim at a comprehensive analysis from Marquette University economist Abdur Chowdury, who showed how RTW could cost the state’s working families a staggering $4.5 billion a year in lost income and cut annual state tax revenues by $240 million.

Chowdury is a long-time Marquette Business School fixture who also spent five years as chief economist of the United Nations Economic Commission in Europe and has served on the academic advisory council of the Federal Reserve Bank of Chicago.

According to Chowdury, for businesses looking to expand or relocate, the biggest appeal of RTW states is low wages—but in an era of globalization, companies looking for cheap labor will go to China or Mexico, not a northern U.S. state that has a RTW law.

U.S. economic competitiveness in the 21st Century depends more on a skilled workforce and developed infrastructure. “If the quality of Wisconsin’s labor force and other assets improve significantly, businesses will be willing and able to pay higher wages and further expand employment opportunities,” he wrote.

“Right-to-work legislation would provide no discernible overall economic advantage to Wisconsin, but it does impose significant social and economic costs. The benefits of right to work enjoyed by some prospective employers are overshadowed by the costs borne by other employers and the state as a whole. … Citizens and potential investors in Wisconsin are all better served by economic development policies that lead to decent wages and working conditions.”

ALEC’s allies at the Heritage Foundation were not pleased. According to Wisconsin’s MacIver Institute, part of the Koch-funded State Policy Network, Heritage's James Sherk claimed in his own Wisconsin testimony to have found “errors” in Chowdhury’s analysis. Sherk travels the country touting the benefits of RTW and his work has been funded by the Milwaukee-based Bradley Foundation (he started at Heritage as a "Bradley Fellow"), whose CEO is Walker's campaign co-chair.

To recap, on one side are UW-Madison and Marquette Business School economists who study the Wisconsin economy, and on the other are Koch- and ALEC-sponsored analysts and PR operations claiming they know better.

With the cookie-cutter legislation likely to rush through the state assembly and be signed by the governor before the end of the week, the ALEC-dominated state legislature has ensured minimal time for discussion on the facts.

“Legislators and the public deserve to make a decision based on serious economic analysis, not on something that has been spun,” political economist Gordon Lafer said.