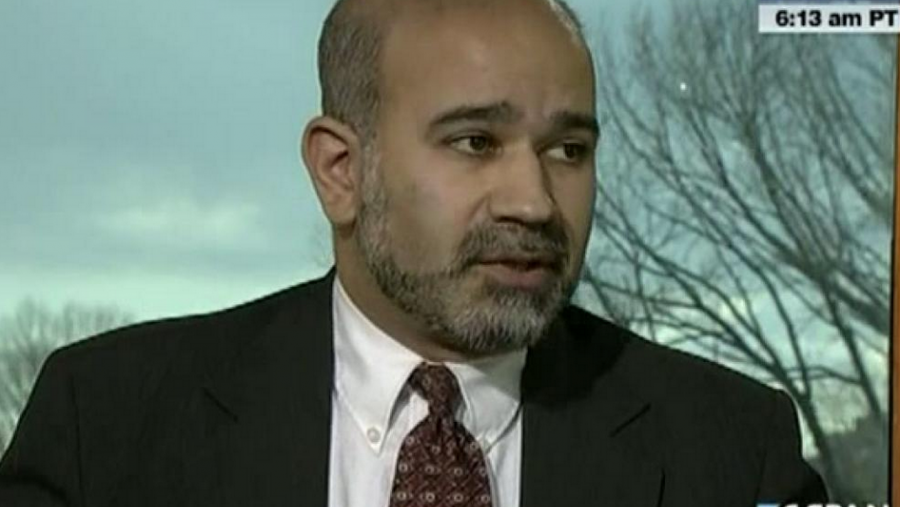 The testimony at yesterday's hearing on the Wisconsin "right to work" bill was dramatic.

"Imagine leaving the [Capitol] today, ready to get some food when a cab pulls up. Two guys grab you, throw you into the back of the cab. The driver announces that the cab is on its way to Green Bay. You protest. But the other passengers don't let you out. They pull over in Green Bay, the car stops, they untie you and demand $300."

This, says Greg Mourad, VP of the National Right to Work Committee (NRTWC), is the way that unions in Wisconsin organize, and why the bill should be passed.

After Scott Walker likened Wisconsin teachers, snowplow drivers, firefighters and cops to terrorists over the weekend, being compared to mere criminals is a step up for union organizers like Eleni Schirmer, who co-chairs the Teaching Assistants Association at UW-Madison.

"First ISIS and then mobsters? It's totally crazy. We are a bunch of students and teachers, and we're only subversive to the extent that wanting people to get college degrees is subversive," said Schirmer.

We know that Wisconsin's right-to-work bill is taken word for word from an American Legislative Exchange Council "model."

But who is Greg Mourad and what is the National Right to Work Committee?

From the Religious Right to Right-to-Work

While an undergraduate at the University of Virginia, Mourad co-founded an evangelical campus newspaper. He was, he explained to the Chicago Tribune, appalled by how secular media "spent time bashing Christ." When the university, citing the Establishment Clause of the First Amendment, refused to fund a religious newspaper through taxpayer money, Mourad sued. The case made it all the way to the U.S. Supreme Court, which ruled in the students' favor in Rosenberg v. University of Virginia. The ruling is widely considered a hallmark victory for the New Christian Right.

The lawsuit might seem hypocritical given Mourad's aggressive stance against fair share dues. Nowhere in the briefs does Mourad or his co-litigants compare the other students--forced through tuition fees to support a rightwing publication whose agenda they do not agree with--with kidnapping victims.

Mourad's litigious history and rightwing zeal proved a perfect match for the National Right to Work Committee, which he joined as VP in 1996, fresh out of college with a BA in Religious Studies.

Leading a 60-Year War on Workers

Founded in 1955 to combat the "evils of compulsory unionism," the National Right to Work Committee has waged a war on workers ever since. Together with its legal arm, whose sole purpose is to sue unions, the organization is a $21 million-a-year legal and lobby powerhouse.

While the organization refuses to disclose its donors, tax filings show that it did receive a $1 million contribution from the Koch brothers' secret bank Freedom Partners in 2012. It received a further $440,000 from the Milwaukee-based Bradley Foundation between 2009 and 2013.

Mourad was questioned by Sen. Chris Larson (D-Milwaukee) during last week's Senate hearing: "Your group has been intricately connected to the Koch family, from Fred Koch out of Kansas to Charles and David. Why do you think some of the richest and most anti-worker people in the world have funded groups like yours? Do you think they're looking out for the little guy?"

"Without confirming or denying, I decline to make guesses," said the expert Mourad.

The National Right to Work Committee was founded by Fred A. Hartley – the New Jersey Republican who co-sponsored the 1947 Taft-Hartley Act, which placed new restrictions on unions, and authorized states to pass right-to-work laws. It was widely denounced as the "slave labor act."

In the mid-50s, Hartley took the fight to Kansas, and with the help of oil money from Fred Koch and Red Scare tactics, arguing that the specter of communism lurked in every union, the campaign succeeded. Kansas passed a right-to-work law in 1958.

Vehemently anti-union, Fred Koch helped co-found the rightwing John Birch Society (JBS) the same year. One of the main objectives of the society was to destroy collective bargaining. This was part of an anti-communist crusade; everywhere the Birchers looked, they saw communist infiltrators rearing their ruddy heads: from the civil rights movement to chief justice Earl Warren, whose liberal rulings, some argued, must have been written at the Kremlin's behest.

The leadership of the two groups overlapped heavily. "JBS members have always been prominent in the open shop movement in general and the NRTWC in particular," watchdog Group Research Inc. writes in a detailed 1962 report on the fledgling National Right to Work Committee. The NRTWC was also part of an "Anti-Communist Liaison" set up by the segregationist evangelist Billy James Hargis, whose National Advisory Committee included Fred Koch.

"Labor Unions have long been a communist goal. How far they have been penetrated by communists I have no idea, but it must be very far indeed," Fred Koch writes in his 1960 pamphlet A Business Man Looks at Communism. When unions are not busy plotting the overthrow of America, they conspire to have the "worker do as little as possible for the money he receives. This practice alone," Koch adds, "can destroy our country."

But what is really destroying the American dream for most working people is stagnating wages. 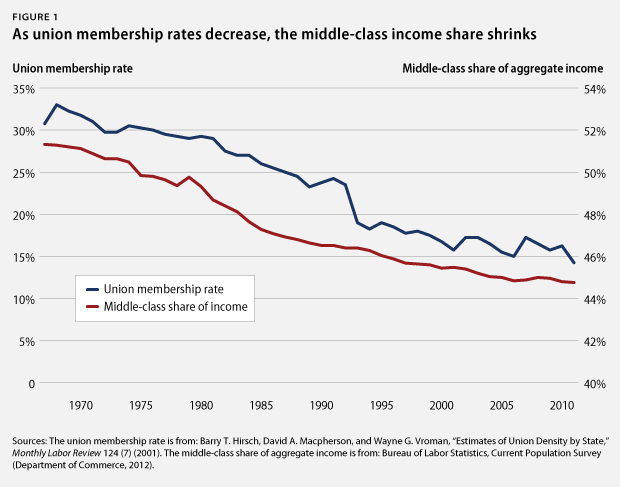 The National Right to Work Committee's decades-long fight to dismantle unions, the only organized voice for working people in our economy, has borne fruit with skyrocketing inequality. CEOs who earned 20 times the pay of the average worker 50 years ago now earn 300 times their pay, according to a study by the Economic Policy Institute. Between 1973 and 2014, membership in public-sector unions dropped by 78 percent.

Now Wisconsin has fast-tracked a right-to-work bill, which experts say will drive down wages in the manufacturing sector and harm the state's economy. Abdur Chowdhury, professor of economics at Marquette University in Milwaukee, estimates that right-to-work legislation would lower wages in the long run and could potentially cost Wisconsin $4.5 billion a year in lost income and revenue. "If our income goes down, we spend less money on groceries," Chowdhury told the Senate committee last week.

For Greg Mourad and his organization, Wisconsin is only a pit stop on a road tour fueled by the Koch brothers and big business. He has been spotted in Indiana and in Maine, and perhaps the next stop is Capitol Hill. Last month, Sens. Rand Paul (R-Kentucky) and Mitch McConnell (R-Kentucky) introduced a "National Right-to-Work Act," which strikes down several provisions protecting workers from the National Labor Relations Act. A companion act was introduced in the House by U.S. Rep. Steve King (R-Iowa). If passed, right to work would be imposed on every single state in one fell swoop. This is unlikely, but the legislation can still gain considerable traction in the GOP-controlled houses of Congress.

To succeed in the national push, "we need five Democrats [in the Senate]," Mourad is quoted as saying.

For more on the deep-pocketed out-of-state interests testifying on behalf of Wisconsin workers see "Koch-Funded Allies Descend on Wisconsin to Push Right to Work."

This is really scary-this group against workers was formed back in 1955. How can anyone besides people such as the koch brothers believe this crap or support it? When is there going to be an uprising of the people? We need to educate people to what is going on if they have their heads in the sand and also get people to the polls! We need to have organizing campaigns to GROW labor unions. Workers deserve a voice at the table and to be treated fairly. Any regular person that is in favor of so called rtw-why do they think it is ok to benefit from an organization but not pay their fair share? Like paying taxes, club memberships, etc., duh! I live in WI & we took multiple financial blows bc of act 10. Now this 4 years later. Nasty, Mean republicans who are corporate whores. Now scotty wants to sell off state parks to corporations after taking state funding away. He's dismantling the dnr-that's just crap he wants to do as of this week. I really wish I could move to MN for instance. Never felt like moving until all this sh**.
RTW is deliberate pure political persecution. The telltale: " employer associations themselves refuse to live by the same rules they seek to impose on unions. In Owensboro, Kentucky, the local Building Trades Council decided to withdraw its membership in the local Chamber of Commerce, but asked if it could still receive full member benefits even though it would no longer be paying dues. Absolutely not, answered the Chamber. “It would be against Chamber by-laws and policy to consider any organization or business a member without dues being paid. The vast majority of the Chamber’s annual revenues come from member dues, and it would be unfair to the other 850+ members to allow an organization not paying dues to be included in member benefits.” from http://www.epi.org/publication/right-to-work-is-the-wrong-answer-for-new-mexicos-economy/ Also good http://www.epi.org/publication/pm174/
"destroy collective bargaining" Inaccurate. The fascists want to retain representative bargaining for *only themselves*. In general, the Koch Party demands laws and court rulings that grant the KP greater legal rights and social benefits than the majority of persons have.