Did Mitch McConnell Fail to Disclose His Trip to the Koch Donor Conference? | PR Watch

Did Mitch McConnell Fail to Disclose His Trip to the Koch Donor Conference? 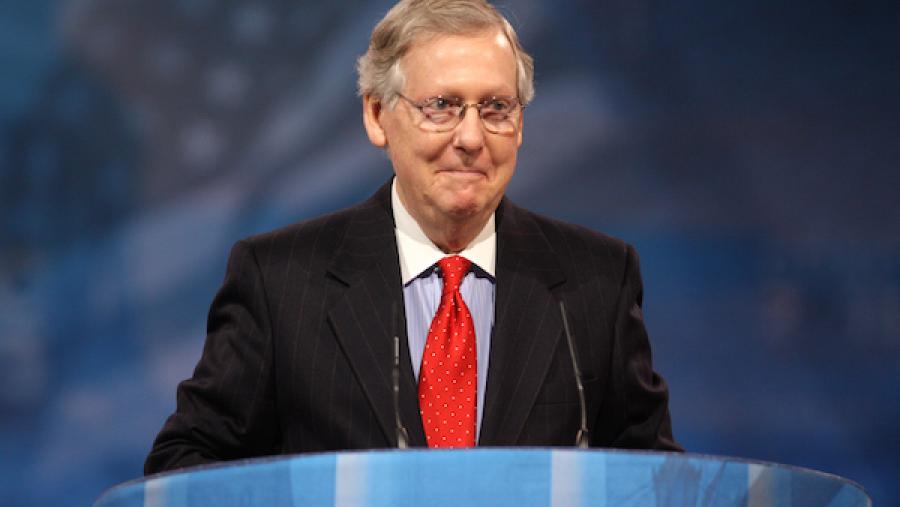 By Lauren Windsor. First published at The Nation.

Mitch McConnell traveled to a secret meeting of donors connected to the Koch brothers network -- and it now appears he didn't disclose the expenses for that trip.

Documents obtained by The Nation, The Undercurrent and the Center for Media and Democracy from the Orange County Sheriffs Department reveal that Mitch McConnell was scheduled to arrive for the confab at the St. Regis Resort in Dana Point, California, on Saturday, June 14. Audio from the conference, which we reported in August, confirms that he gave a speech there the following day.

Yet the hotel expense for that night at the St. Regis does not appear to have been disclosed in McConnell's filings with the FEC nor to Senate Ethics.

Federal legislators are required by law to disclose trips like this one, unless they pay for them personally. McConnell's campaign did not return request for comment about how he paid for the hotel.

Melanie Sloan, the executive director of the Center for Responsibility and Ethics in Washington, told me that personal payments are rare. "That's just not the way members of Congress operate," she said. "They have too many other pots of money at their disposal to pay for these things themselves."

Politicians have very few requirements for travel disclosures and can easily obscure these trips when they don't stay overnight. For example, flight expenses indicate the airline and costs, but not the destination or purpose of travel. Thus, hotel expenses are often the only way to tie a politician to a particular event.

Secrecy was of course the name of the game for this event. The Koch brothers paid a premium to conduct the donor event in private; they reserved the entire venue and hired private security officers to supplement their own security team.

There are many ways for McConnell to have paid for the trip if not out of his own pocket, according to Democratic attorney Joe Sandler, who specializes in campaign finance ethics. But there is no evidence of any of these routes.

McConnell could have sought approval from the Senate Ethics Committee as a third party expense, paid by a nonprofit or for-profit group -- in this case Freedom Partners or Koch Industries. The Senate's Outside Paid Travel Database shows no Ethics Committee filings for Mitch McConnell.

Moreover, the FEC reports for Freedom Partners Action Fund, the Koch outfit which funded the conference, likewise do not show any expenditure for McConnell's stay at the St. Regis, though it's possible they could have disguised it by lumping it with in-kind contributions to candidates. But McConnell still would have to have sought approval from Senate Ethics, which he didn't.

McConnell theoretically could have listed it as a Senate office travel expense, paid for by taxpayers, but that is supposed to be restricted to home-state travel for the purposes of legislative business. Those disclosures aren't due until after the election, but it is unlikely McConnell chose this flagrantly incorrect route.

Finally, McConnell could have had his trip paid for by his campaign committee, his leadership PAC or another PAC.

But the St. Regis in Dana Point appears nowhere in the FEC reports for the senator's campaign committee nor his leadership PAC And indeed, all of the other Senate candidates in attendance -- Tom Cotton, Joni Ernst and Cory Gardner -- disclosed in this fashion, via their campaign committees.

"The absence of any report of the expenditure by the campaign or leadership PAC raises serious questions about how the trip was paid for and why the costs were not treated as a campaign expense as they were by the other campaigns," said Sandler.

When OBAMA was campaigning and the media said he was returning to Chicago to rest and be with family we all know he attended a secret Bilderberg meeting. How is it the media covered that up? Or when Hillary met them? You see it's not just one side or the other. Two sides of the same coin.