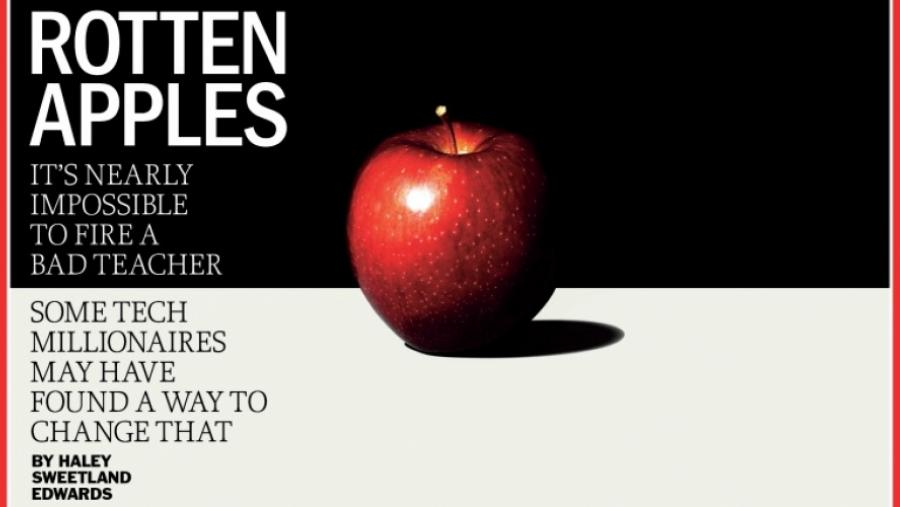 This article was originally published by Common Dreams.

Educators and parents are slamming TIME magazine editors for their November 3rd issue cover, which they say levies "malicious" and "false" attacks against the nation's public school teachers.

"ROTTEN APPLES," reads the cover, which includes an image of an apple about to be pounded by a gavel. "It's Nearly Impossible to Fire a Bad Teacher. Some Tech Millionaires May Have Found a Way to Change That." The picture and text promote a story by Haley Sweetland Edwards.

"TIME magazine is about to use its cover to blame teachers for every problem in America's schools," said American Federation of Teachers president Randi Weingarten. According to Weingarten, the message of the cover does not even accurately represent the magazine's "own reporting," which, she says, raises important questions about "the testing industry's connections to Silicon Valley and the motives of these players."

As one of the top-selling magazines in the United States, the issue will be seen on display in dentists' offices, grocery stores, and news stands across the country. Critics say that the nuance of the article itself is steamrolled by the magazine's anti-teacher cover, which parrots the narrative of the so-called "corporate education reformers," who push policies to break teachers' unions, privatize public education, and emphasize high-stakes standardized testing.

"TIME: apologize to America's teachers for the misleading and hyperbolic attack on your November 3 cover," reads an AFT petition created in response to the magazine's editorial decision.

This is not the first time a major publication has run such a cover, as historian Diane Ravitch points out. In 2010, Newsweek ran a cover which reads, "We Must Fire Bad Teachers." In 2008, TIME ran a story presenting Michelle Rhee, a prominent teachers' union buster and advocate of corporate education reform, as a savior for America's public schools. Critics charge that, beyond magazine covers, corporate media outlets have played a critical role in advancing the political agenda of corporate education reformers, who fill both political parties and dominate the Department of Education, with numerous wealthy backers, including the Gates, Broad, and Walton Family Foundations.

"Since when do tech millionaires know anything about teaching children?" asked Ravitch, who criticized the "malicious" TIME cover. "Why should they determine the lives and careers of educators? Why don't they volunteer to teach for a week and then share their new wisdom?"

Speaking over the phone with Common Dreams, Ron Whitehorne, a retired Philadelphia teacher and current coordinator for the Philadelphia Coalition Advocating for Public Schools, agreed: "These are people whose real concerns are making money for themselves and advancing an agenda around privatization. They're setting themselves up as experts on what our schools need, and that's ridiculous. They're also adopting mantle of civil rights and racial equality, but their track record shows they are disinvesting from our urban communities."

Sally Lee, a New York City-based public school parent and executive director of Teachers Unite, told Common Dreams that the cover is blatantly false. "It's not true that it's 'impossible to fire a bad teacher,' whatever that means," she said. "Unions give people due process."

Lee continued, "We are seeing everything from union busting to the creation and proliferation of charter schools, which tap public funds while taking away rights of parents and teachers to organize at school. We are seeing publishing companies reeling in millions of dollars in contracts because of the push for standardized testing. There's this fantasy that people who haven't studied education and pedagogy know better. But it's just a boondoggle for private organizations and businesses."