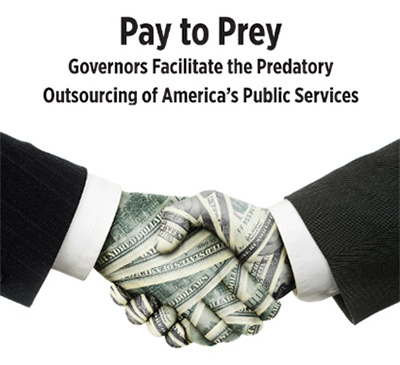 Maggots, drug smuggling, sex with inmates. As if the news were not already bad enough, shocking new allegations of a murder-for-hire plot are emerging from Michigan as the media digs deeper into that state's failed outsourcing of prison services.

In 2013, Governor Rick Snyder invited the Philadelphia-based for-profit company Aramark to take over food services in the state's prisons. The action was a 180-degree change in course, as the administration previously rejected all such bids on the grounds that none of the proposals would save the state money. The $570,000 Aramark spent on lobbying surely helped the company persuade the administration to change its mind.

Since Aramark took over Michigan's $145 million food service contract -- eviscerating the stable middle class jobs of some 370 public workers -- one stomach churning scandal followed another. The state fined Aramark $98,000 in March for food shortages, "unauthorized menu substitutions" and sexual relations between kitchen workers and inmates, and another $200,000 in August after problems persisted.

All the while, the Snyder administration has stood behind the company and the state prison director secretly waived the $98,000 fine soon after it was imposed. Perhaps Snyder will reconsider this position given new allegations that an Aramark worker has asked a prisoner to assist him with the murder of another inmate.

While Aramark's failed outsourcing of prison food services is a dramatic example of the harms that can arise from the America's public services and assets, this report, Pay to Prey: Governors Facilitate the Predatory Outsourcing of America's Public Services, contains many other cases of outsourcing run amok generating worse outcomes for the public, often higher costs, lawsuits and scorching headlines.

While large corporations are the winners in this scenario, all too often taxpayers are the losers when transparency, accountability and the public interest are sold out to for-profit firms.

Outsourcing of public services is a big business. Some experts estimate that $1 trillion out of the $6 trillion the federal government, together with state and local governments, spend annually are handed over to private contractors.

In 2010, an electoral landslide ushered in a new breed of governors. Aided and abetted by corporate-funded legislative and lobbying groups, such as the American Legislative Exchange Counsel (ALEC), these governors pushed the envelope of outsourcing and privatization, selling public services to for-profit firms with their powerful political lobbies and related campaign contributions.

In this process, transparency and accountability are lost and the public loses its ability to influence decision makers through normal democratic channels. Shared prosperity also suffers when good middle class jobs are lost to low-road, low-wage employers.

In this effort to shrink government and sell off the prosperous parts to private interests, the winners are large corporations with a phalanx of lobbyists and campaign coffers big enough to buy political influence. All too often, taxpayers find themselves on the losing side.

While there are countless examples of privatizations gone awry costing taxpayers more money, few independent studies have been conducted on the true costs of outsourcing. Do reduced labor costs save taxpayers money or do any savings line the pockets of CEOs and shareholders? One survey by the International City/County Management Association showed that 52 percent of governments that brought services back in-house reported that the primary reason was insufficient cost savings.

As this report goes to print, Indiana's groundbreaking sale of the Indiana Toll Road to a foreign conglomerate is ending in outright bankruptcy and uncertainty for drivers; Governor Bobby Jindal's former health secretary is indicted for lying about his role in the awarding of a $200-million Medicaid contract, while his controversial privatization of public hospitals is being rolled back by the federal government; and a Florida newspaper reports that just months after the health care services in state prison were outsourced, inmate deaths spiked to a ten-year high.

• FLORIDA: When Florida Governor Rick Scott took office in 2011, he promised sweeping changes in prisons, health care and education. During his tenure, he went on to privatize state health care services for prisoners resulting in a significant increase in inmate death. His privatization of Medicaid services benefited the bottom line of private HMOs, who spent $2.54 million lobbying, while shortchanging the most needy. He also signed bills into law requiring every high school student to take online classes, aiding private firms Pearson, K12 Inc., Connections Academy, and Kaplan, which have spent $2.357 million on lobbying in the state.

• KANSAS: After his inauguration in 2011, Kansas Governor Sam Brownback immediately began to slash core government services and privatize the rest. In the words of one critic, he used citizens as "crash test dummies." Among other things, he outsourced child support services to YoungWilliams, whose CEO is a campaign donor. Brownback's austerity politics resulted in the state being downgraded by S&P in August 2014, and have caused a mutiny among fellow party-members.

• MICHIGAN: With Republicans in firm control of both houses of the legislature, Michigan Governor Rick Snyder has advanced an extreme privatization agenda. When private contractor Aramark took over prison food services in the state, one scandal followed another: from maggots and food poisoning to sexual encounters and murder for hire. Bills introduced by ALEC legislators have resulted in the number of online K12 Inc. schools skyrocketing, despite the fact that these schools fail to educate children as well as public brick-and-mortar schools. But Snyder remains firm in his support.

• OHIO: Governor John Kasich has also pursued an extreme privatization agenda, using state liquor revenue to bankroll a privatized economic development agency. Taxpayers are losing out on millions in revenue each year, but the private agency is producing few jobs. He has also pushed prison privatization, creating Ohio's first private prison and serving up more maggots with prison food contractor Aramark. Further privatization of public schools is also on the menu in Ohio, where Kasich campaign contributor White Hat is busy evading open records and accountability and transforming public money into private assets in a controversial case before the state's Supreme Court.

• PENNSYLVANIA: Despite a promise to make school funding a top priority, Governor Tom Corbett cut education funding by close to $1 billion during his tenure and expanded charter schools run by private companies. In his attempts to uphold a repressive voter ID law -- later declared unconstitutional -- he paid millions to outside law firms last year that were also some of his biggest campaign donors. Other big spenders in his 2010 campaign were Wal-Mart and local gas station chain Sheetz, two companies that stand to benefit from the governor's planned privatization of liquor stores.

• MAINE: Maine Governor Paul LePage has repeatedly vetoed bills that would expand Medicaid coverage for low-income Mainers, referring to the expansion as "ruinous." However, his efforts to prop up his agenda with research showing the cost-efficiency of privatization backfired. LePage awarded consultancy firm Alexander Group a $1 million no-bid contract for reports on Medicaid outsourcing. When one report turned out to be full of erroneous data and plagiarized passages, there was no getting the $474,760 already spent back. LePage also continues to facilitate efforts by Nestlé/Poland Spring water, which has spent more than $100,000 lobbying the legislature in this small state, to pump precious public water for private gain.

• WISCONSIN: Since being elected to office in 2011, Scott Walker has waged a campaign against most things public. He has done so by privatizing the state's economic development functions, generating grants for donors but few jobs. According to one report, Walker donors ended up getting 60 percent of the funding even though they only made up 30 percent of the recipients.