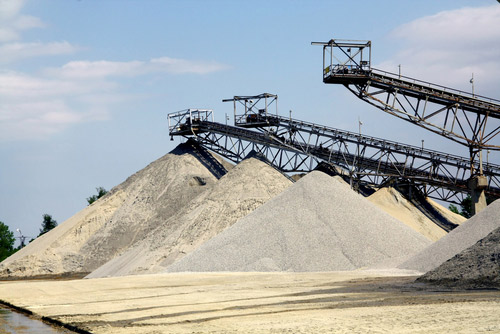 Mining of the fine-grain sand needed for hydraulic fracturing, known as frac sand, is putting communities in Wisconsin and Minnesota at risk, according to a new report by the Civil Society Institute's Boston Action Research (BAR) and released in cooperation with the Environmental Working Group (EWG) and the Midwest Environmental Advocates (MEA).

Wisconsin's pro-mining governor and legislature has led to an increase in frac sand facilities in the state, from seven in 2010 to 145 by late 2013. Yet as the Pulitzer Prize-winning Inside Climate News has noted, the health implications of the mines, which can kick up silica dust and other particles and utilizes a raft of chemicals in processing, aren't yet fully understood. This has led some states to take a go-slow approach. Minnesota "has so far been more cautious with respect to industry expansion in the state," the BAR report notes.

The Center for Media and Democracy started reporting on the effects of frac sand mining in Wisconsin before there was much media scrutiny of the industry. BAR's report comes at a time when the industry is poised for possible expansion into 12 other states: Illinois, Maine, Massachusetts, Michigan, Missouri, New York, North Carolina, South Carolina, Pennsylvania, Tennessee, Vermont, and Virginia.

What concerns does the frac sand mining industry pose?

One primary concern is water. The Driftless region of Wisconsin and Minnesota is environmentally fragile, full of bodies of water and the industry uses millions of gallons per day. The report notes:

"Individual mining operations withdraw between 420 thousand and 2 million gallons per day. The volume of water used is significant, and added chemicals to process the sand compound water related problems with sand mining. Polyacrylamide, a flocculent, that encourages clumping of particles to remove impurities from the sand is used at mining and processing operations. It contains traces of acrylamide and can break down into acrylamide, a neurotoxin and known carcinogen, and can enter groundwater or surface water from wastewater ponds at mining operations or from piles of processed sand ready to be transported. There is also increasing concern with acid mine runoff from operating and reclaimed frac sand mines."

Another concern is air quality. Sand mining is a dusty operation, and the fine particles of silica released into the air can cause lung damage. "Depending on the amount and duration of exposure, silica dust can cause silicosis of the lungs, a well-known hazard in mining, and at natural gas and oil drill sites due to the use of sand in fracking operations," according to the report.

Finally, sand mining can cause financial issues for communities near frac sand mines. Nearby real estate can dip in value as much as 25 percent, and significantly, the heavy wear and tear of mining equipment and trucks on local roads takes a heavy toll. According to the report:

"Even though Minnesota state law allows counties to levy a 15-cent per ton aggregate extraction tax to help offset the costs of road repair, many counties choose not to. Additionally, the Minnesota Local Research Board found that 22 cents per ton-mile would be a more accurate amount to cover the costs."

The report recommends that states and communities "take a step back" and examine the "issues, challenges, and consequences of the shale gas fuel cycle" before allowing the industry to continue to expand. Several communities have attempted that, including three Wisconsin counties, but a 2011 Wisconsin law restricted the adoption of moratoria, overriding these communities' ability to decide how to manage an industry with such strong effects on its citizens and environment.

"Citizens living near frac sand mining in Wisconsin are witnessing a massive destruction of their rural landscape," MEA executive director Kimberlee Wright said in a statement. "Elected officials and our states' natural resources protection agency have largely dismissed local citizens' concerns about their health, the health of their environment and their quality of life. Without a clearer view of the big picture of frac sand mining's impact, laws that protect our communities' air and water aren't being developed or enforced."