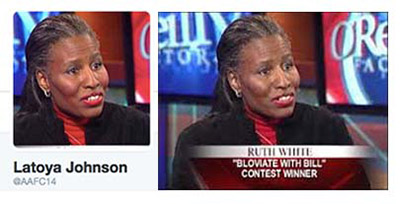 As Tea Party sentiment swept the country a few years ago, the media saw a new brood of young Republicans. Smooth and confident but also prone to anger and aggression, these budding "rock stars" of the movement held prominent positions in campus organizations bankrolled by the GOP. But it was an uneasy relationship. Their frat boy hijinks were often excused by party officials. After all, they were the future of the Republican Party. As for any misogynistic or xenophobic pranks, well, boys will be boys.

Sometimes, however, they went too far.

Rubbing shoulders with white supremacists was treated as not a big deal, but when rising rightwing star James O'Keefe III placed "prank" calls to Planned Parenthood offices explaining his willingness to make donations as long as the money was earmarked to abort African American fetuses, he had overstepped a line. In 2007, he was given the pink slip by the Leadership Institute, which has received some funding for years from the Koch family fortune and other rightwing funders. The Institute, whose mission is "political technology" and training of the next generation of rightwing activists and leaders, had previously taken O'Keefe under its wing. But his racist stunt (performed under the guise of exposing racism) – and other attacks on Planned Parenthood – turned him into a liability. O'Keefe's stunts, says the New York Times, threatened the thin "veneer of nonpartisanship" on which the tax-exempt status of the Institute hinged.

O'Keefe's long-time ally Ryan Sorba is another case in point. He has frequently made enemies of more moderate Republicans. At a 2010 CPAC conference, his rabid anti-gay rant ("I'd like to condemn CPAC for bringing GOPride to this event … you just made an enemy out of me") proved too much even for the most conservative "pro-family" delegates. He was booed off the stage, and called "intrinsically evil." Yet, he has suggested his stand led to the resignation of CPAC's David Keene, who now takes a more active role defending the NRA's position on guns.

In 2009, Sorba worked in cahoots with O'Keefe on the attack on ACORN. The organization, with a 30-year track record of helping the poor, registering people to vote, and bettering public schools, was later cleared of any wrongdoing. But the media frenzy (O'Keefe III showed up in a pimp outfit on Fox News) caused it to lose federal funding, and it was later disbanded.

While majoring in psychology at California State, Sorba was head of Young Conservatives for California. He was also Congressional Action Team Leader for FreedomWorks, a $15 million organization underwriting assorted Tea Party events and spawned by the Kochs' Citizens for a Sound Economy before it split into FreedomWorks and Americans for Prosperity. Between his studies and GOP commitments, he found time to travel around California, and gate crash university panel discussions. In the epilogue to Republican Gomorrah: Inside the Movement that Shattered the Party, journalist Max Blumenthal describes a harrowing encounter with Sorba:

"Beside me sat Jonathan Walton, an African-American professor of religious studies … and Mark Takano, an erudite, openly gay former Democratic congressional candidate and local community college trustee. In the middle of our discussion, a dozen College Republicans stormed in front of the stage with signs denouncing me as a ‘left-wing hack' while a hysterical young man [i.e. Ryan Sorba] leapt from the crowd, blowing kisses mockingly at Takano … Afterward, university police officers insisted on escorting me to my ride after the right-wing heckler attempted to follow me as he shouted threats."

It is no surprise that Sorba's rap sheet includes a three-year restraining order for domestic violence. According to court documents, he was barred from having any contact with his brother, and forced to move out of the family dwelling in 2001.

For all his bigotry, Sorba believes that people can change. Especially gay people.

In 2007, he self-published The "Born Gay" Hoax. In this hodgepodge of vitriol and pseudo-scientific theories debunked half a century ago, Sorba argues that being gay is a disease (and, oddly enough, also a fad manufactured by liberal academics.) Fortunately, Sorba has hit upon the cure. By replacing the word "gay" with "sodomy," "unnatural vice" or "anti-Christian," in the public discourse, he hopes to shame everyone into voluntarily stepping forward for some conversion therapy. 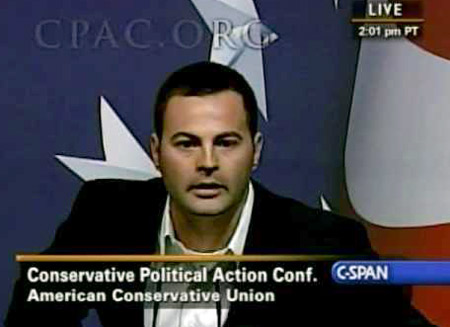 Recently, Sorba seems to have dropped off the media radar. But he turned up at a Netroots Nation conference for progressives this summer, praising the work of the Center for Media and Democracy (which publishes PRWatch.org), and especially CMD's research into undisclosed election spending. He claimed his sister was working to defeat Republican Senator Mitch McConnell and asked CMD's executive director Lisa Graves for political advice on how to beat him, which she rebuffed.

Sorba was accompanied by a cameraman giving the name of Ernie Cruz. "Cruz" snapped one photo but rested the camera on his chest, perhaps for surreptitious filming of Sorba's effort to get Graves to discuss electoral strategy.

Graves was skeptical of the questions and behavior of the duo and pressed them for their email addresses, but they claimed they had none. She pointed to Sorba's lanyard which read Ryan Paulson, which, incidentally, is the surname of the woman who filed a restraining order thirteen years ago. Sorba stumbled, admitting it was not his actual name and saying it was his mother's maiden name, and then proffered the email address RyanByotch@gmail.com. Graves turned to the older Cruz and said, "surely you have an AOL account?" He then gave one under the name erniecruz@aol.com.

Later that day, "Cruz" and Sorba would rush to try to get Graves on film again as she spoke with others at the conference, but she ditched them and tipped off other attendees that there was a rightwing undercover crew on site.

Later that evening, Sorba showed up at a private social event and made a bee line to Graves with two blondes in tow (lest anyone doubt whether Sorba has fallen for the supposed Gay hoax, he has surrounded himself with dozens of women for an "epic" Facebook cover photo). Graves got the interlopers bounced.

Sorba was not done trying to get CMD's director on tape. In line with his previous behavior, he didn't think twice before chasing her down a hotel hallway at 2:00 a.m., which prompted a fellow writer to intervene.

CMD believes Sorba may have been working for longtime ally James O'Keefe III – the "citizen journalist" whose fabricated stories on grassroots organizations have been compared to Bob Woodward and Carl Bernstein's breaking of the Watergate scandal – by the grandiose O'Keefe himself.

As chance would have it, O'Keefe showed more of an affinity with Nixon than with the two Washington Post journalists.

In 2010, he was arrested by the FBI for orchestrating an attempt to infiltrate the New Orleans office of Senator Mary Landrieu (D). Not only did the incident become known as "Louisiana Watergate," in a further twist of fate, O'Keefe chose Michael Madigan to represent him. The white-collar lawyer had previously served as counsel for Nixon's "close friend and trusted advisor" Senator Howard Baker during the Watergate investigations.

It turned out that CMD hadn't seen the last of the O'Keefe crowd.

A few weeks later, CMD was approached by Latoya Johnson, an African American woman interested in making a film on dark money election spending and its impact on the African-American community. Because CMD is an expert on the spending of the Koch brothers and other phony "issue ad" groups in the electoral campaign cycle, she was keen to have CMD onboard.

Money was not a problem – as long as CMD was willing to accept secret money itself, that is. Staff showed her the door, but she left her card. It had the address of the NAACP's D.C. office on it. No one there had ever heard of her. The card also listed her Twitter account, created the day CMD agreed to a meeting with her about her purported film on dark money, as CMD has met with numerous documentary filmmakers, all for free. 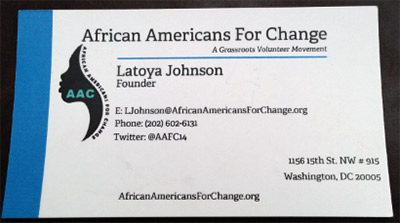 Despite a meager 13 Tweets, the woman had already achieved minor stardom in the Twittersphere with 1,262 followers, a pricey endeavor that sometimes costs $2-3 a follower.

Ms. Johnson's real name, CMD soon found out, is Ruth Bryant White. In 2008, the Las Vegas resident ran for president as an independent on a platform of corporal punishment and the deportation of immigrants. She is currently CEO of Breaking News Journal, a not entirely successful attempt to operate a right-wing media empire on a shoestring budget.

And here's the rub. Ruth Bryant White might belong to the political fringe, but she has always been upfront about her beliefs it seems, until this failed sting.

The fact that she went undercover as Latoya Johnson – distributing false business cards and creating websites and Twitter accounts all in an attempt to frame us – now this betrayed a different MO altogether.

Interestingly, two of her Facebook friends are Ryan Sorba and James O'Keefe. O'Keefe's operations have also been highlighted on her website. Check out our previous article on the encounter with Latoya here.

Who Is Bankrolling the Bunglers?

CMD has not yet discovered who is funding the effort to try to put the organization in a compromising position.

O'Keefe is known to get some portion of his funding from the Koch-funded DonorsTrust and Donors Capitol Fund. The twin donor-advised funds were specifically designed to allow politically motivated right-wing individuals and corporations to remain hidden when "funding sensitive or controversial issues." In 2012, O'Keefe's outfit, named Project Veritas, received $105,000 from Donors Capitol and $124,450 from DonorsTrust.

There might also be a more local connection. The Milwaukee-based Lynde and Harry Bradley foundation has given more than $3 million to the Intercollegiate Studies Institute and $875,000 to the Leadership Institute, two groups which groomed O'Keefe to become a conservative activist while in college. In a 2010 interview with Politico, the Bradley Foundation's president Michael Grebe, who was also Campaign Chairman for Governor Scott Walker in 2010, expressed his admiration for O'Keefe's brand of "citizen journalism," and his hatchet job on ACORN.

Grebe and friends are likely not happy about CMD's relentless reporting on the Scott Walker dark money criminal probe and the right-wing effort to stop it.

However, who really bankrolled Sorba and White, their travels, hotel and fees, to target CMD, remains to be seen.

UPDATE: CMD later figured out who bankrolled the hit here. CMD previously reported on being the target of a sting attempt here.

Ryan Sorba was named Ryan Paulson during his school days. He never changed his name legally. He uses Sorba as his stage name, but he had to get the press pass in his legal name, Ryan Paulson. He continues to lie about this just as he has used deception all along. Btw, he never finished that 2007 "Gay Hoax" book for which he gets so much publicity. It ends abruptly and none of it is Ryan's research. It was given to him by Scott Lively, the infamous preacher of hate who is currently on trial for crimes against humanity as he spreads his gospel of gay genocide. Ryan added little substance to the pile of steaming dung. Thanks for pointing out Ryan's 3 year long restraining order involved his brother, but it was filed by his Mother. Who the heck is so violent against his own Mother that she has to kick him out via a 3 year long restraining order (they are usually for six months)?