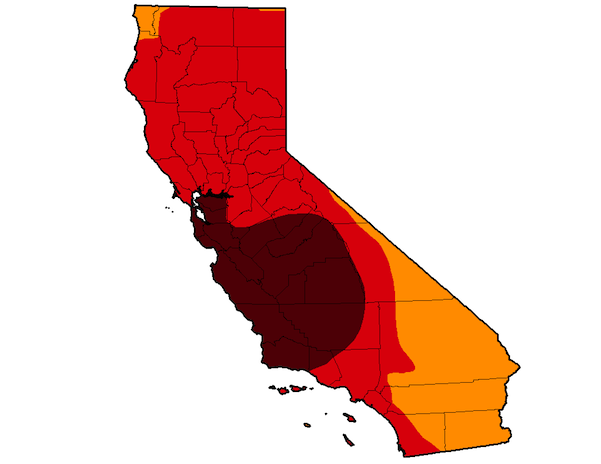 California is a trendsetter. Food, fashion, music, film… a lot of what makes up contemporary American culture today got its start in the Golden State. Usually, that’s a good thing. But not always.

What happened in California last week was a bad omen for the rest of the country, particularly if the Keystone XL pipeline is built.

It starts with a massive oil spill, caused by a pipeline leak in the middle of Los Angeles. It continues with an unseasonably vicious heat wave, combined with a drought-fueled wildfire epidemic, compounded by a drought-spawned agricultural emergency, and a renewed debate on fracking triggered by a frightening lack of drinking water. But despite all of this bad news, there’s still a silver lining around the black cloud.

The oil spill occurred in the Atwater Village neighborhood just north of Downtown LA. A 20-inch break in an above-ground pipe reportedly shot geysers of oil 20 feet into the air, eventually spilling 10,000 gallons of crude oil, which settled into knee-deep pools some 40 feet across. Fire crews said there was no evidence the oil made its way into nearby storm drains, which would channel the oil into nearby beaches and the Pacific Ocean, but some of it may have seeped through manholes and into sewers.

As alarming as it is to see a lake of oil in the middle of a major metropolitan area, it’s not nearly as frightening as what might happen in the heartland if Keystone XL is built. Much of the pipeline is planned for underground construction, and a large part of it will pass through or near the Ogallala Aquifer, the largest freshwater reserve in the continental United States. A 10,000-gallon spill in the aquifer could have devastating effect on local farms and ranches.

But, sadly, a 10,000-gallon leak would hardly be a blip on the radar. TransCanada wants to pump 830,000 barrels – more than 26 million gallons – through KXL every day. And the leak detection equipment they intend to use to keep the pipeline safe is woefully inadequate for the task. As Natural Resource Defense Council’s Anthony Swift writes:

TransCanada has told regulators that its leak detection system has a threshold of between 1.5% and 2%. Given that Keystone XL has a maximum capacity of 830,000 barrels of tar sands [oil] per day, TransCanada is saying that Keystone XL’s leak detection system can only reliably identify leaks if they’re spilling more than 500,000 to 700,000 gallons of tar sands [oil] a day.

Half-a-million gallons of oil leaking into an underground aquifer might not be as visually stunning as a 20-foot geyser of crude in the shadow of the Hollywood sign, but happening underground in close proximity to a vulnerable and economically crucial aquifer is far more dramatic. How many days could a lesser spill go undetected? And who could reassure us that the grain and livestock watered by that aquifer are not contaminated? The social unrest caused by a food shortage that could trigger would certainly rival anything the movie studios bring to the box office this summer.

And what are we to make of this summer, already so devastating in California a month before its official arrival? Last week saw a triple-digit heatwave in parts of the state, shattering high temp records that had stood for decades. Those high temperatures, combined with high winds and years-long drought, with the entire state in a condition of “severe” drought or worse, made parts of San Diego County a veritable tinderbox and forced thousands to flee their homes.

The lack of rain has crippled the state’s $42 billion agriculture industry, which provides nearly half of the country’s fruits and vegetables. Prices are already up about 2 percent, and are expected to climb higher as conditions have worsened to the point that Ag Secretary Tom Vilsack declared 57 of California’s 58 counties primary disaster areas, making farmers eligible for low-interest loans they’ll need to survive.

Relief might come if predictions of a strong El Niño in the Pacific Ocean are correct. The warm-water current in the equatorial Pacific Ocean usually signifies strong, wet weather systems during the rainy season in western North America. Following a sustained drought, it might replenish reservoirs, but it will also likely cause flooding and landslides, as bone-dry hillsides are unable to absorb a sudden massive downpour.

But there is some upside to all of this infernal weather. Thanks to the wildfires, whose numbers more than doubled the annual average to date, Gov. Jerry Brown (D) has thrown down the gauntlet on climate change, acknowledging its impact on the state, and calling out the Republican Party for its knee-jerk denial of the problem.

More encouraging is the fact that California’s electrical grid was able to withstand a statewide heat wave without succumbing to brownouts or blackouts, thanks in no small part to the rapid growth in residential solar energy production. Thanks to tax incentives, rebates, and lower costs, California installed more solar panels in 2013 than in the previous 30 years. And with water becoming an evermore precious commodity, public support for a moratorium on fracking is growing, with a move in the state senate to make it law.

Perhaps those developments will build on California’s role as trendsetter. Expanding solar capacity and protecting water resources from fracking might be the best things the state has given the rest of the country since the Beach Boys.

Hopefully the rest of the U.S. won’t have to suffer from pipeline ruptures, deadly heatwaves, scorching droughts, and devastating wildfires before it learns that climate change is here, and we need to stop it before it stops us.