Tim Carpenter's Politics of Radical Inclusion: In the Streets and in the Polling Booth | PR Watch

Tim Carpenter's Politics of Radical Inclusion: In the Streets and in the Polling Booth 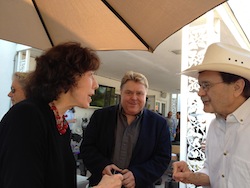 Tim Carpenter never lost faith in the very real prospect of a very radical change for the better. And he never lost his organizer’s certainty that the tipping point that would make the change was just a few more phone calls, a few more rallies, a few more campaigns away.

So he kept on organizing.

Carpenter, the lifelong social and economic justice campaigner who for a decade was not just the national director but the heart and soul of Progressive Democrats of America, died Monday at age 55 after a long battle with cancer.

Not many hours before I learned that he had passed, Tim was on the phone with me, running through the latest numbers from a national petition drive he and PDA had organized to urge Vermont Senator Bernie Sanders to seek the presidency. They were over 10,500. A few hours after the call, he emailed me, with more numbers. They were over 11,000. That was typical Tim. His enthusiasm for politics was immeasurable, and infectious.

But Tim’s was never a typical politics. He knew the drill: he had been at the side of presidential candidates, developed winning electoral strategies and helped to organize movements around every essential issue of the Carter, Reagan, Bush, Clinton, Bush (again) and Obama eras. But Tim was always about something more; he was never satisfied with an election victory, or a legislative success; he wanted to transform politics because he wanted to transform America into a land that realized what he believed was an irrevocable promise of liberty and justice for all.

To achieve that end, Tim knew it was necessary to transform a too-often centrist, too-frequently compromised Democratic party into a dramatically more militant and more meaningful organization than it has been for a very long time. Mixing memories of the New Deal with elements of the 1960s civil rights and anti-war movements, linking the vision of the Rainbow Coalition with the new energy of fast-food and retail workers demanding a $15 minimum wage, Tim sought to define and achieve what one of his heroes, author and Democratic Socialists of America chair Michael Harrington, described as “the left wing of the possible.”

Tim refused to compromise with politics as usual. Yet, he refused just as ardently to be pushed to the margins. He waded into the middle of every new fight, grabbed a stack of precinct lists, distributed them to the activists he’d brought along in that beat-up car with Bob Dylan blasting on the stereo, and headed for the doors shouting, “Teamwork!”

“The Progressive movement is driven by people, but it is only successful because of people like Tim Carpenter,” said Congressional Progressive Caucus co-chair Keith Ellison, D-Minnesota, a PDA board member who got it right when he said, “Tim showed the kind of determination and courage that was contagious. His passionate idealism was matched only by his inexhaustible commitment to making those dreams a reality.”

Combining his encyclopedic knowledge of movement history and electoral strategy with the knowing optimism of one who had actually bent the long arc of history toward justice, Tim embraced an “inside-outside strategy” that was designed to go around the party elites and link insurgent campaigns to grassroots movements.

“In the polling booth and in the streets” was his vision, and if that meant breaking with the party establishment and aligning with the demonstrators outside the party convention, or outside the White House of a Democratic president, so be it. The principles were the point, and while Tim could join a coalition with folks who might not share every one of his positions, he believed his mission was to pull that coalition to the left.

Tim was a Democrat – to the frustration of his Green, Socialist and social Libertarian friends – but he was never a member of the Democratic Party establishment. He was the thorn in its side, declaring, “I’m not satisfied with the party as it is. I want the party as it should be.”

Tim cut his teeth on campaigns that recognized the connection between transforming politics and transforming the country: as an kid working “behind the Orange Curtain” (in then hyper-conservative Orange County) for George McGovern in 1972 and for the remarkable radical intervention that was Tom Hayden’s 1976 U.S. Senate bid. Tim was a trusted aide to the Rev. Jesse Jackson’s 1988 “Rainbow Coalition” run for the presidency, an inner-circle strategist for Jerry Brown’s 1992 presidential run (addressing that year's Democratic National Convention and urging delegates to "Save Our Party" from ideological compromises and corporate influence), a key figure in Dennis Kucinich’s anti-war presidential campaign of 2004.

Tim worked on plenty of campaigns that lost – as well as winning campaigns such as those of Congresswoman Donna Edwards, D-Maryland, Massachusetts Governor Deval Patrick and, to his immense delight, Senator Elizabeth Warren, D-Massachusetts – but he didn’t count wins and losses. He was interested in movement building. Drawing together veterans of the 2004 Kucinich and Howard Dean campaigns, Progressive Democrats of America grew into a national network of activists and elected officials on the left of the party, became a vehicle for that vision of a movement-guided politics.

It was the same vision that shaped Tim's grassroots activism, as a Catholic Worker advocate for the homeless who slept on the streets of Santa Ana to challenge police harassment; as an organizer of the anti-nuclear Alliance for Survival who counted musician-activists Jackson Browne and Bonnie Raitt as friends and comrades; as an organizer and champion of groups that opposed not just wars but the overreach of a military-industrial complex -- from United for Peace and Justice to Democrats for Peace Conversion. To begin to list Tim’s causes, his victories and his ongoing struggles would take days – or weeks if Tim was still telling the stories. But suffice it to say that, for more than four decades, he was there – behind the scenes, sleeping on the floor, risking arrest, flying in with the rock stars, counseling the presidential candidates, remembering the name of every son and daughter of every activist, making the money pitch, organizing, always organizing.

The Nation named Tim as its "Progressive Activist of the Year" some years back. And it was far from the only honor accorded him. When Congressman John Conyers, the Michigan Democrat who is the senior progressive in Congress and arguably in America politics, learned that Tim was sick, he told the U.S. House, “Tim has been indefatigable in pressing forward progressive ideals to help strengthen our American democracy.  He has been in the forefront of progressive causes, from promoting nuclear disarmament to fighting to abolish the death penalty to establishing health care as a human right, as well as securing voting rights and jobs for all."

Around the same time, Tim’s daughter ran up to him with an envelope from the White House that had arrived in the mailbox of the family’s Florence, Massachusetts, home. When they opened it, there was a note from President Obama, wishing Tim well while celebrating his resilience.

That was how most of us took the news that Tim was ailing. Knowing he had beaten cancer before, we wanted to believe that Tim was unstoppable. When he warned “it’s pretty serious this time,” we paid attention to his actions, not his words. Because even as he made the rounds of doctors and hospitals, treatments and hospice preparations, he was still on the phone, still texting, still emailing, still organizing.

Tim was determined that Progressive Democrats of America, a group founded when Democrats were not doing enough to oppose the war in Iraq or to advance a “Medicare for All’ reform of a broken health-care system – PDA's slogan: “Healthcare Not Warfare” – would keep embracing new issues: amending the U.S. Constitution to end the buying of elections by billionaires and corporations, getting Washington to take seriously the threat of climate change, blocking "Fast Track" and the Trans-Pacific Partnership trade deal.

Tim believed every battle could be won, by building bigger coalitions, by getting more people engaged.

Tim had a remarkable gift for what actress and PDA advisory board chair Mimi Kennedy referred to as “radical inclusivity.” He was always welcoming young activists into the fold, flying off to meet with folks who might form a new PDA chapter, asking people to tell him what new issues they were working on -- and then asking how he could help. He had a faith that the change was going to come: a faith born in having won and having lost but never having surrendered the organizer’s dream of a movement that would be unstoppable.

We were in California last year and Tim asked a crowd to:

Help us grow this movement. Help us to put 435 activists in every congressional office, and another 100 activists in every Senate office to say: Not only is it time to end this war, not only is it time to bring about health care as a human right, but it’s time for our community to stop turning our back on those who so desperately need us. To stop talking just about the middle class… It’s time to talk about the 50 million Americans who are poor.

A politics that speaks not only for  the middle class but for the poor – proudly, energetically, radically  – jumps boundaries that many top Democrats still avoid. But that was what Tim Carpenter wanted.

If we did not fully understand then, we do now.

Tim Carpenter was right. The building of the politics he wanted -- more powerful than any party or politician -- is now our responsibility. But Tim is with us in spirit, still telling us that the key is not money or television ads, not caution or compromise. It's a passion for justice. It's a belief that peace is possible. And, like Tim said, it's "Teamwork!"

The article originally appeared in The Nation.