A controversial mining bill, which opponents say will weaken environmental standards and threaten the state's water resources, has passed the Wisconsin State Senate. The bill, the first to be introduced in the 2013-2014 legislative session, passed 17 to 16 with one Republican, Senator Dale Schultz, voting against along with the 15 Senate Democrats. SB1 is nearly identical to the bill that failed to pass in 2012.

Critics charge that the bill weakens environmental protections in order to facilitate a specific project proposed by Gogebic Taconite. The company, a local subsidiary of the Cline Group, has proposed a 20-mile open pit iron-ore mine in the Penokee Hills of Northern Wisconsin and played a major role in writing the bill. Despite the expected passage of the bill, opponents predict the proposed mine will be held up in federal court.

Legislators Showered with Millions in Donations from Mining Interests

As documented by the Wisconsin Democracy Campaign, special interest groups that support the mining bill "have contributed $15.6 million to the Republican-controlled legislature and GOP Governor Scott Walker" between 2010 and June 2012. They also found that mining deregulation interests outspent opponents of mining deregulation by 610 to 1.

Walker, who has traveled around the state pushing the mining bill as a solution to Wisconsin's dismal job numbers, received over $11 million from those special interests. Senator Alberta Darling, one of the co-chairs of the powerful Joint Finance Committee through which the mining bill had to pass, has received almost half a million dollars. The Committee to Elect a Republican Senate is also on the list of top recipients of pro-mining dollars, receiving $313,413. Senate Majority Leader Scott Fitzgerald received $262,735. The list of candidates getting over $50,000 from special interests that support mining deregulation includes Senators; Terry Moulton, Sheila Harsdorf, Leah Vukmir, Jerry Petrowski, Tom Tiffany, Luther Olsen, Frank Lasee, Robert Cowles, and Glenn Grothman. 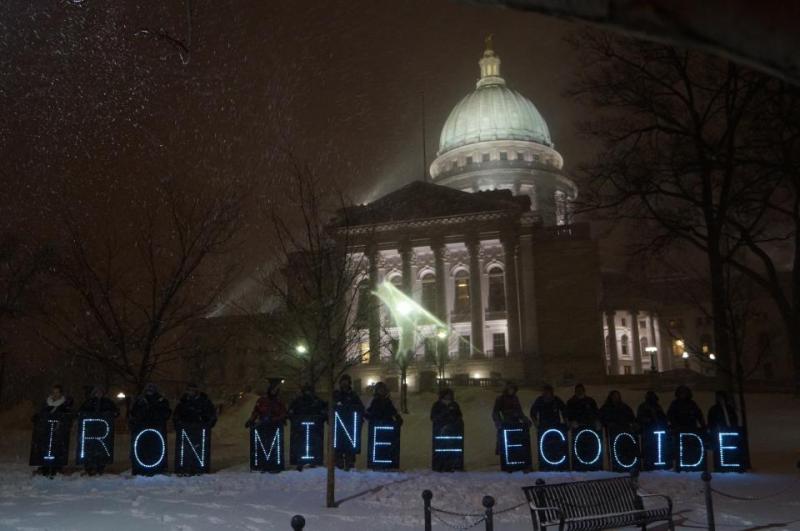 Scientists testified last year that millions of gallons of sulfuric acid could be produced if the proposed open pit iron-ore mine was approved. That sulfuric acid would unavoidably leak into the ground water and nearby streams, and would eventually make its way to Lake Superior, the largest freshwater lake in the world. These concerns, based on the geological facts in the ground, have been largely overlooked by proponents of the bill, who say that the Department of Natural Resources (DNR) will make the final decision about the environmental impact. But opponents point out that the bill is stripping power from the DNR and shortening their time frame for investigating and ultimately approving any proposed project.

Tribal leaders from the Bad River and Red Cliff Bands of the Lake Superior Chippewa warn that under federal law it is required that they be consulted regarding any project that could affect their tribal land and water, and their input was not taken into account in the language of this bill. The tribes are considering their legal options.

Bryan Bainbridge, a member of the Tribal Governing Council of the Red Cliff Band explained: "We are here to protect our greatest resource, Lake Superior. There will be no mine. There are too many people who are joined together. It's not just native people who are dealing with this, it won't just affect a native person, it won't just poison them, it will poison everyone."

But the bill's impact is bigger than one mine. It speeds the approval of new mines across the state, and lessens the power of citizen and community input in the permitting process. Anne Sayers of the Wisconsin League of Conservation Voters warns that the bill is "a threat to our safe drinking water, flowing trout streams, and tourism economy."

"This is not a sprint" Opposition Will Continue

A group of tribal members from Northern Wisconsin traveled over 300 miles to make a final attempt to encourage a few more Republican Senators to vote against the bill, and to once more express their opposition.

Mike Wiggins, Jr., the Tribal Chairman of the Bad River Band of Lake Superior Chippewa, told CMD: "The type of corporate giveaway that AB/SB 1 represents to the mining company is viewed by us as an imminent threat. It's just a no-brainer when you look at the types of exemptions that the mining company is allowed when it comes to environmental protections." He also vowed that the fight against the mine would continue: "This is not a sprint, we're ready to do whatever it takes for however long it takes to defend our home."

The bill is expected to be taken up in the Wisconsin Assembly next week and passed, but there is no doubt that many consider this the beginning and not the end of the battle.

The indian tribes are hypocrites, they are polluting the river worse than the mine ever will!!
Do you have information/links to go with that statement
So...by what, fishing?
By "ever will" I assume that you mean "ever could", since all we have are model simulations or predictions? If that is the case, that the native Americans are polluting Lake Superior more than a open pit iron mine ever could, i.e. by leeching thousands of gallons of sulfuric acid into the watershed, dropping the pH, deoxygenating the water and thereby making it uninhabitable for the current ecosystem, then by all means tell us- what in the world is it that the native Americans are actually doing?
To the tribal leaders, you all have abused the spearing and taking away fish that has taken this state millions of dollars to stock and have pissed off so many at doing so!!!!! In such a way as to leave piles of uncleaned fish or bragging boars and pics of muskie's laying on the ice at fis spearring contest's, that you are soon going to feel the pain at the casino's, for you cant rape our lakes, then want us to back you on some thing about our lakes! PLEASE we all can work on our great state and all its lakes together,thanks DK
Abusing the wildlife of the area is sad, but is not the issue at hand. Besides that, the actions of a few do not equal the actions of a whole, and we cannot assume that every person has the same values. This is about the big picture; many have played a part in polluting Lake Michigan and the economic losses that have resulted. The point here is to preserve what we have--Lake Superior is a huge resource. It would be devastating to destroy another of our great lakes, one of our nations jewels, and that which makes our region special.