One year ago today, 17-year-old Trayvon Martin was shot and killed by 28-year-old George Zimmerman. On average, 30 people are killed by firearms each day, so Trayvon Martin could have become just another faceless statistic. But the tragedy soon gained national attention as a result of the injustice wrought by Florida's "Stand Your Ground" law, which was cited to protect Zimmerman from prosecution because he claimed to have felt threatened by the unarmed African-American teenager.

The Trayvon Martin tragedy soon led to an examination of Stand Your Ground laws, as well as the organization responsible for their proliferation: the American Legislative Exchange Council, or ALEC. 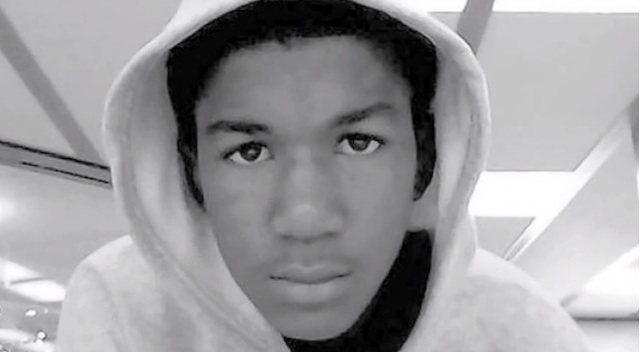 Florida's 2005 Stand Your Ground law changed criminal justice and civil law codes by giving legal immunity to a person who, according to the statute, uses "deadly force if he or she reasonably believes it is necessary to do so to prevent death or great bodily harm." It goes beyond the common law notion of self defense by establishing a presumption in a shooter's favor. This means prosecutors must disprove a killer's assertion that they felt threatened, as opposed to the shooter having to establish they acted reasonably and in self defense. It also bars the deceased's family from bringing a civil suit.

Martin, who was returning from a trip to 7-11 with a bag of skittles and a can of iced tea, was about 50 pounds lighter than Zimmerman and not carrying a weapon. But Zimmerman nonetheless perceived the high schooler as a threat.

Zimmerman called 911 the night of the incident to report Martin, whose only offense appeared to be walking through a gated Orlando suburb while black, and pursued the teen even after the 911 operator told him not to. "He's a black male...Something's wrong with him...These a**holes, they always get away," Zimmerman told the operator. There were no witnesses when Zimmerman shot Martin in the chest. But even in the absence of evidence, Sanford police believed Zimmerman's claim that he felt threatened by the unarmed teenager, and citing the Stand Your Ground law, ruled the homicide justifiable.

Thanks to the dedication of Martin's parents, the tragedy eventually attracted national attention -- and national outrage, because it appeared that Martin's race is what led Zimmerman to perceive the unarmed high-schooler as a "threat," and that local law enforcement agreed that Zimmerman's perception was "reasonable." As a result of Stand Your Ground, the subjective fear that led to Martin's death ended up being protected under the law.

The controversy highlighted the racial fault lines that continue to divide America, with a heated backlash against the assertion that race played any factor in Martin's death -- and a concerted effort by some on the right to portray Martin as someone who deserved to die.

It also drew attention to the Stand Your Ground law that had passed in Florida and 25 other states since 2005, and brought unprecedented scrutiny to ALEC, which the Center for Media and Democracy documented as being responsible for the law's spread across the country.

Pushback Against Stand Your Ground?

Only after a massive public outcry did Florida law enforcement reconsider their assessment of the Trayvon Martin case, appointing a special prosecutor and eventually arresting him months after the shooting. Although pro-gun advocates have since claimed that Stand Your Ground was improperly applied to Zimmerman's situation, the number of homicides in Florida classified as justifiable tripled in the years after Stand Your Ground became law -- and public pressure never forced law enforcement to take a closer look at the other cases where Stand Your Ground was cited. Indeed, a Tampa Bay Times investigation found that nearly 70 percent of those who invoked the Stand Your Ground defense in Florida went free, including gang members and violent aggressors, and killers were more likely to prevail if their victims were black.

Although prosecutors are now moving forward with second-degree murder charges, Zimmerman is invoking another provision of the Stand Your Ground law offering a pre-trial immunity hearing, scheduled for April 22. If he can convince the judge he acted in self-defense, Zimmerman will be given immunity and never have to face a jury, and Martin's family can never bring a civil suit.

Florida Governor Rick Scott (R) assembled a panel in 2012 to review whether the Stand Your Ground legislation needed an amendment. But the panel ignored empirical evidence showing the laws correspond with an increase in homicides and nonetheless endorsed the NRA-backed bill with no changes. Half of the lawmakers on the panel are ALEC members. Though the law passed with bipartisan support in 2005, Democrats in Florida are now calling for its repeal (a prospect unlikely in the GOP-dominated legislature).

The panel also rejected a plea from Martin's family to add a "Trayvon Martin Amendment," which would clarify that a person who starts a fight cannot then claim self-defense under the law. The family is now advocating for states that have NRA/ALEC Stand Your Ground laws on the books to make such a change.

ALEC is the corporate-funded organization that allows global corporations like Wal-Mart and ideological special interests like the National Rifle Association (NRA) to hand state legislators changes to the laws they desire. ALEC "model bills" have served as the template for voter ID laws that swept the country in 2011, for the "voucher" programs that privatize education, for anti-environmental deregulatory bills, and for the wave of anti-union legislation in Wisconsin, Ohio, and most recently, Michigan. 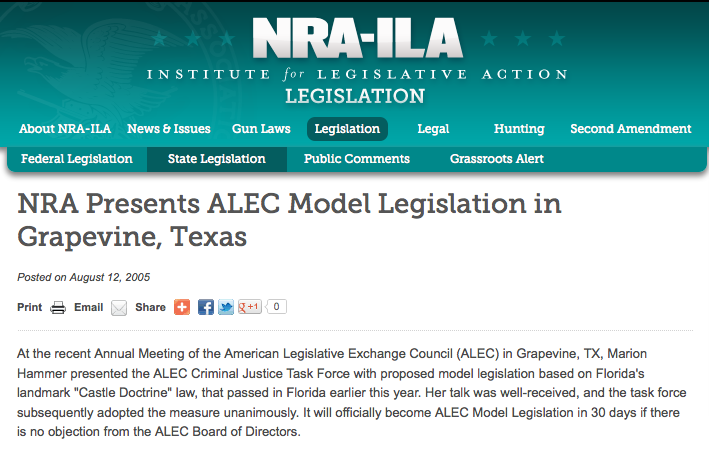 The NRA and its lobbyist Marion Hammer helped draft the "stand your ground" law and first pushed it in Florida. Florida Senator Durell Peaden, an ALEC member, introduced the law in his state and it passed in early 2005 as the NRA's Hammer reportedly "stared down legislators as they voted." (U.S. Senator Marco Rubio was a Florida legislator and ALEC member in 2005 and voted in favor of the bill). After Governor Jeb Bush signed it into law, Hammer presented the bill to ALEC's Criminal Justice Task Force months later.

As the Center for Media and Democracy uncovered, the NRA boasted that "[h]er talk was well-received," and the corporations and state legislators on the Task Force voted unanimously to approve the bill as an ALEC model, under the name the "Castle Doctrine Act." At the time, Wal-Mart was the corporate co-chair of the Task Force. Since becoming an ALEC model, 26 states have passed laws that contain provisions identical or similar to the ALEC legislation. ALEC called the legislation one of its "successes."

When ALEC's role in promulgating Stand Your Ground legislation became public in 2012, the spotlight turned on to the organization like never before. The public soon became aware of ALEC's role in advancing an array of reactionary bills, including legislation that makes it harder to vote, that criminalizes immigrants, protects corporations from civil liability, thwarts environmental regulations, and cuts holes in the social safety net -- all while enjoying tax-exempt "charitable" status.

In response to public criticism and a campaign led by Color of Change, more than 40 corporations, including General Motors, General Electric, Amazon.com, and Coca-Cola, have severed ties with ALEC. In April 2012, ALEC claimed to disband the task force responsible for its most controversial legislation -- such as Stand Your Ground, voter suppression, and anti-immigrant bills -- purportedly to focus exclusively on "economic" issues. And the damage control has continued. At its July 2012 meeting, ALEC pledged to expand membership among "underrepresented segments," perhaps in response to critiques that ALEC laws disproportionately impact people of color, despite the vast majority of ALEC members being white.

But the organization has still refused to call for the repeal of ALEC-approved laws, like Stand Your Ground, that have already caused so much harm.

The stand-your-ground law doesn't apply to George Zimmerman because he was the pursuer AND aggitator of the incident. The law applies to a person who is put into a threatening confrontation. I believe this is the precise reason why the prosecutor decided to charge him. HE was the initiator...to put it into perspective: if a person accompanies someone else in a robbery, then someone dies as a result, then the one who accompanied ALSO gets charged with murder even if he didn't do the shooting.
This article is biased and full of mis-imformation. Is is so blatently biased that it has some of the same imformation that caused abc news to be sued. George zimmerman could site the stand your ground law but he is hasen't in his court case. He dosent have too because he was blatently attacked by the 6'3" treyvon martin who doubled back and came out of the dark and attacked zimmerman and literally was banging zimmermans head into the concrete in the middle of the night. Zimmerman is only using a defence of "self defence" in his court case. This article is eitheir a blatent lie or poorly researched. Zimmerman lawfully pulled out his gun and shot martin before he was knocked out and possibly killed. Treyvon Martins assault on zimmerman was a third degree felony assault of aggravated assault in the state of florida and carries a 20 year sentance. Treyvon Martin was suspended from school for drugs at the time he assaulted zimmerman. Treyvon Martins father and his fathers "baby mamma" and their attorney "Benjamin Crump" can not sue anyone and make money off of their sons death unless Zimmerman is convicted of a crime hense all of the attention they raised about the case instead of mourning their sons death quietly like most people would have done.
WOW! I suggest you immediately return to school as it is painfully obvious that you slept through all your classes the first time.
<blockquote>Treyvon Martin was suspended from school for drugs at the time he assaulted zimmerman..."</blockquote> Oh, so it was open season on kids suspended from school for drugs. <blockquote>...hense all of the attention they raised about the case instead of mourning their sons death quietly like most people would have done."</blockquote> So, if their son had been shot to death by some armed, adrenaline-junky vigilante out hunting for hoodies and the cops hadn't arrested his killer, you think "most people" would just "mourn quietly" and not raise the cry for justice? You yourself would have just "mourned quietly"? Yeah, right. If Zimmerman hadn't been armed he might have thought twice before he went looking for trouble, especially from somebody who looked as menacing as you think Trayvon Martin did; Martin would have just gone home with his snacks, and the whole thing would never have happened. The more guns in circulation, the more violence we'll have. It's that simple.
The only Bias regarding George Zimmerman is your bias. I agree with the other comment regarding your lack of schooling. It is quite obvious your view of the situation is colored by your own ignorance.
I get it - don't give you any facts, you're racist mind is already made up. You're not just a racist, you're an apologist for racism. And don't forget, Zimmerman's Daddy's a Judge, so that's another reason his shit don't stink.