Corporate backers of the American Legislative Exchange Council (ALEC) have funneled more than an estimated $4 million in gifts to state legislators for travel, hotel rooms, and meals at posh resorts since 2006, according to estimates based on internal ALEC records. The corporate lobby front group is already facing an Internal Revenue Service review of claims that it violated federal law by posing as a charity. 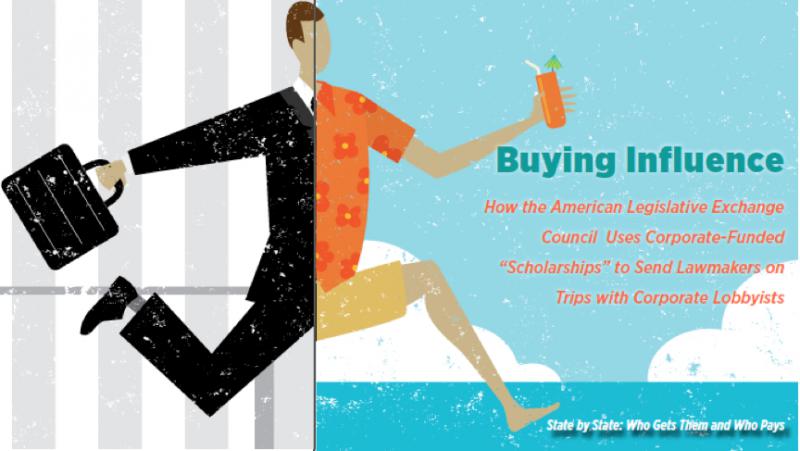 A new report by the Center for Media and Democracy (CMD), Common Cause, and DBA Press says hundreds of "scholarships" provided to lawmakers by ALEC were actually expense-paid junkets to resorts where ALEC hosted meetings to advance its pro-corporate legislative agenda. The report reflects ALEC's complete record of travel-related payments to lawmakers from 2006 through 2008, when the group was spending about $600,000 annually on the trips, and partial data for the years since then, a period when ALEC has increased its membership by several hundred legislators.

"ALEC has created a scheme to funnel money from corporations to pay for legislators' trips, amounting to a million dollar-plus slush fund that leaves constituents in the dark about who is really footing the bills for their representatives," the report said.

The top ten corporate donors to the ALEC scholarship fund were: 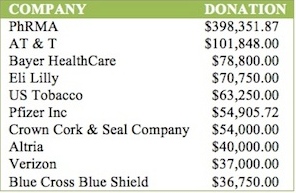 The report, "Buying Influence," said many legislators don't tell their constituents they received these gifts. And by paying for the junkets through ALEC, a tax-exempt group registered under section 501(c)(3) of the federal tax code, the companies can claim the expense as a tax deduction, effectively shifting the cost to taxpayers, the report said.

"We now know which corporations funded trips to posh resorts for hundreds of lawmakers to vote behind closed doors with lobbyists on proposals to change state laws," said Lisa Graves, executive director of CMD and ALECexposed.org. "It's disgraceful for ALEC to act as a conduit for gifts to facilitate influence peddling that advances the lobbying agenda of special interests to the detriment of ordinary Americans."

"The audacity of ALEC and its corporate sponsors continues to amaze," said Common Cause President Bob Edgar. "They have the right to lobby for laws they believe will make their businesses more profitable, but when that lobbying includes expense-paid weekends at posh resorts, concealed from but subsidized by the taxpayers through a cynical manipulation of the tax code, they go too far."

The report said ALEC promotes its meetings at resorts "in vacation-like terms." And ALEC meetings regularly include special and exclusive events for lawmakers, such as cigar parties or tickets to the party deck of a Major League Baseball game with special food and drink.

Edgar said legislators who've accepted ALEC's gifts should make sure the money is fully disclosed to their constituents. Ideally, they would refund it, he added.

To address the unethical and potentially corrupting nature of ALEC scholarships and operations, Common Cause and CMD urge that existing state gift limits or bans should be applied to ALEC travel scholarships or modified to ensure that they do. In addition, ALEC slush fund expenditures should be disclosed, the groups said.

The report also found that: 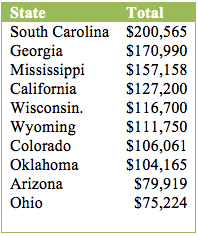 More than 40 companies, including Coca-Cola, McDonald's, General Motors, Wal-Mart, and General Electric, have left ALEC in recent months, most in the wake of publicity about the group's involvement in promoting "Stand Your Ground" gun laws like the one that initially shielded the killer of Florida teenager Trayvon Martin from prosecution early this year.

Founded in the 1970s, ALEC is an association of business representatives and state legislators that produces and promotes pro-business model legislation in statehouses across the country. Lawmakers pay $50 per year to join, but most of ALEC's annual budget of about $7 million comes from corporations and other sources. Because ALEC is registered as a tax-exempt, non-profit organization, donations to become a member of ALEC and for the travel fund are treated as tax-deductible.

Though IRS regulations strictly limit lobbying activity by such groups, and ALEC has sworn on its tax forms that it does no lobbying, Common Cause has filed a "whistleblower" complaint against ALEC with the IRS and released more than 4,000 pages of ALEC position papers, "issue alerts," draft press advisories and other materials documenting ALEC's lobbying.