Confronted with a report by ProgressVA stating that through the American Legislative Exchange Council (ALEC) corporate lobbyists get access to legislators "behind closed doors," ALEC politician Bill Howell dismissed the claim and told the Richmond Times-Dispatch that all ALEC meetings were open to the public.

That would be breaking news to both traditional press and the online media that have been blocked from ALEC meetings and are increasingly being threatened with arrest.

Reporters from media outlets that ALEC considers critical of the organization are not able to get credentials. Just ask CMD's reporter Eric Carlson, who was denied press credentials, then kicked out of the lobby of the Marriott in New Orleans and threatened with arrest for the crime of sitting in a public lobby. Lee Fang, of Think Progress, was dragged out of the same conference after being denied credentials. CMD's Brendan Fischer, did make it into the meeting, but only because he requested credentials while writing for Madison's Capital Times newspaper. He was kept out of key task force meetings, escorted by interns and watched like a hawk.

At the most recent ALEC meeting in Phoenix, Arizona in November, Beau Hodai, a staff writer for the print magazine In These Times, was denied credentials after writing stories critical of ALEC. Al Jazeera America was also denied press credentials in New Orleans. The reason? Al Jazeera, a respected media outlet with some 80 million viewers, was a "foreign" outlet. Yet the ALEC convention included foreign politicians and foreign corporations discussing global issues. Al Jazeera America's in-depth investigative report on the Koch brothers, including information about the Center for Media and Democracy's research, and ALEC's funders can be seen here.

Olivia Ward, an investigative reporter with the Toronto Star, who was told she could not observe an ALEC meeting about budget policies even though she had press credentials issued by ALEC for the meeting. Here's how she described what happened:

I stay behind and wait for the Fiscal Policy Reform Working Group to begin. It will drill down on one the hottest issues in Washington, tax reform, and review a model bill on opposing state bailouts by the federal government. A friendly voice greets me: Kaitlyn Buss (ALEC's Communications Director).

"I hope you're enjoying the conference," she says. "But I'm afraid you'll have to leave the room."

"But I've just sat through another working group. Why is this one different?"

"Some are open, others aren't. It's just the rules."

These rules also ensure that ALEC board meetings, task force meetings and social events are closed to the press and the public. 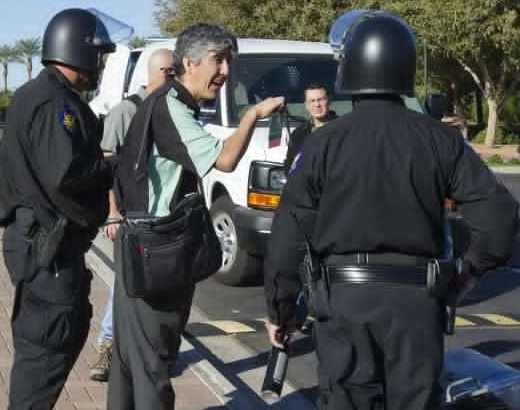 As the group comes under increased scrutiny, threats and intimidation of reporters at ALEC meetings are on the rise. At ALEC's convention in Phoenix, Arizona Republic reporter Bob Ortega was threatened with arrest by police after he was seen interviewing protesters outside the ALEC conference. It is not clear whether police were acting on their own or in conjunction with ALEC requests regarding the protesters.

Inside the ALEC convention's hotel, Hodai was threatened with arrest for "trespass," even though he was a paid guest at the hotel. As described in his latest report, "Arizona's Escort Service," Hodai was seized at the direction of hotel security by uniformed Phoenix police officers at the hotel bar, traditionally open to guests and the general public. The Toronto Star's Olivia Ward was also interrogated by police after she was seen talking with Hodai at the bar. A hotel representative told Hodai, "the ALEC people don't want you here."

Hodai was escorted out of the hotel by the police. And, when this reporter arrived to pick him up, I was also threatened. As I attempted to use my phone to take a photo of Hodai surrounded by three uniformed police officers, I was told that the sidewalk I was standing on at the edge of the resort was private property and when I stepped into the street an officer said that too was private property and mentioned the crime of trespass. While one police officer also threatened to ticket my car, another began videotaping me for daring to try to take a picture of the scene, as three hotel staffers looked on and merry ALEC members walked back to the resort from nearby parties. If only my camera phone had worked....

Even Members Can Be Ejected

Other ALEC events closed to the public and the press, and even some ALEC members, are its fancy parties underwritten by ALEC corporations like tobacco giant Reynolds and Diageo, the world's largest producer of alcoholic drinks. Wisconsin Rep. Mark Pocan was a dues paying member of ALEC last summer, but was ejected anyway from the New Orleans cigar party for ALEC members and lobbyists sponsored by Reynolds. Pocan did go on to write a widely circulated piece for The Progressive magazine about his experience, "Inside the ALEC Dating Service."

A Challenge to this "Transparent" Organization

Rep. Howell sits on ALEC's governing "public sector board," as well as ALEC's task force that approves model bills that restrict the rights of Americans injured or killed by corporations and on its task force that supports international trade policies that ship American jobs overseas. None of these entities allow the press or the public in to view their proceedings.

As the Speaker of the Virginia House, Rep. Howell should know the difference between an open and a closed meeting. Yet, Howell and other ALEC politicians have been challenging newspaper editorials and articles critical of ALEC's closed door deliberations and secret votes of legislators and politicians by actually asserting that ALEC is a "transparent" organization, operating much like an other legislative organization.

They also like to compare ALEC to the National Conference of State Legislators (NCSL), the largest grouping of state legislators in the nation. Unlike ALEC, NCSL posts all of its policy documents (and its press policy) online. CMD's ALEC Exposed project exposed ALEC-approved "model" bills secretly voted on by ALEC corporations and legislators, bills that are introduced in legislatures without any reference to the fact that corporate lobbyists already pre-voted on them.

In contrast, at the widely bipartisan NCSL conventions, every task force, every board meeting, every business meeting and even social events are open to the media. According to NCSL's press office, NCSL responds to over 2,000 media requests a year and has never ejected a reporter from a conference.

NCSL and hundreds of other professional public policy organizations have found ways to accommodate the third estate, pro or con. It's time for ALEC to stop harassing the media and adopt the open meetings policies of legitimate, professional organizations like NCSL.

Telling it like it is in the face of gross disinformation spewed by key ALEC members. Good job CMD and Graves. Keep up the spilling of bright sunlight on this cancerous blight upon our democracy.
Thanks for this report. Cited at PolicyMic — http://www.policymic.com/articles/3372/two-years-on-citizens-united-has-destroyed-america-with-the-rise-of-super-pacs&op=#comment-59113
http://www.ncsl.org/Portals/1/Forms/exhibitorlisting11.htm The presence of booths by ALEC and many of their corporate members should dispel – once and for all – any comparisons between ALEC and NCSL, as if NCSL was the liberal equivalent to ALEC.
Understanding ALEC is crucial to the Occupy movement. ALEC needs to be linked to shock doctrine/disaster capitalism: a clever plan for global capitalism hegemony, well planned, organized, and funded. These psychopathic biophobes know what they are doing, know it's wrong, and fully intend to getaway with it. Keep up the good work CMD!
I have visited to this site multiple times and everytime I find beneficial jobs for me so I would suggest please come to this site and take the chance from here. <a href="http://www.destinationliving.com.au/">Builders Melbourne</a>
Much thanks to you for the embodiment of an otherworldly online journal. Where else might any individual get that sort of data composed in quite an impressive maculate way? I have a presentation that I am quickly finishing up, and I have been on the search out for such informative content, and I a large number of Thank to you. <a href="http://www.spielhallenfuchs.com/novoline-online/">novoline online</a>