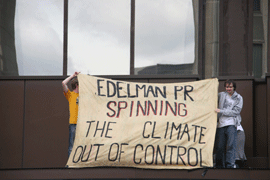 Like so many companies, E.ON UK gushes about its corporate social responsibility program and proclaims that it is "working towards low carbon energy" and that "climate change is an important issue for society." It sounds reassuring, but the reality is much more disturbing.

Telling Us Nothing We Don't Already Know

When E.ON UK prepared its environmental impact statement to try and justify its decision to build two new 800 megawatt coal fired units at the site of the existing Kingsnorth power station, it supplied 253 pages of information. This includes almost 50 pages on ecological issues, 16 pages on transport issues and another 20 on noise issues. While all these are important aspects that need to be addressed, the fact that E.ON devotes only 54 words to addressing the issue of carbon dioxide emissions from the plant is testimony to their arrogance.

"Anthropogenic emissions of carbon dioxide have been identified as playing a major role in Global Warming. The efficiency of the new units will be greater than the plant efficiency of the existing Kingsnorth power station. Thus the new units will emit less CO2 per GWh of electricity produced than the existing Kingsnorth power station," is all the company's report states (PDF, page 44).

That's it. All of what they state is true, but disingenuous in the extreme.

The comparison of the proposed new power station with the old one is one of those tired old "straw men" debating tricks. It is irrelevant that new coal fired units at Kingsnorth would be more efficient than the older units at the existing power station. After all, E.ON itself has agreed that the existing power station is so polluting that it has to be shut down in order to meet the pollution control requirements of the European Union Large Combustion Plant Directive. Indeed, the existing plant is so inefficient, it is difficult to conceive of any new coal-fired power station being less efficient. More importantly, the retirement of the old plants like this offers the UK the chance to realize substantial carbon dioxide emissions cuts by abandoning all new coal power station proposals in favour of cheaper, faster and more greenhouse friendly energy efficiency and decentralised power supply options.

Nor would the scale of the carbon dioxide emissions from the proposed plant be a minor matter. It has been estimated that the annual emissions from the rebirthed station would be approximately eight million tonnes of carbon dioxide a year. The World Development Movement points out that the new power station alone would emit more carbon dioxide than all of Ghana. But it is actually worse than that, as the working life of a coal-fired power station extends to 30 years or more. Over its operating life the new Kingsnorth plant would emit more than 240 million tonnes of carbon dioxide, over the very decades we need to be making substantial cuts to emissions to try and avoid disastrous global climate change.

In short, E.ON UK's 54-word statement told us nothing we didn't already know. But the sheer gall of the company seeking to trivialise over 240 million tonnes of greenhouse gas emissions is staggering.

As if Kingsnorth won't do enough damage to the global climate, E.ON U.K has proposals for two of the six other coal fired power stations in the UK mentioned above. On top of that its parent company and affiliates have proposals at various stages of development for ten more spanning across Belgium, Bulgaria, Germany, the Netherlands and Romania.

As hundreds and possibly thousands of people prepare to protest against the Kingsnorth proposal, it is easy to see why E.ON is looking to Edelman for PR salvation. And it is no surprise that Edelman took the account. After all, Edelman has worked for odious clients such as the tobacco industry, hyped dot com companies before the "tech wreck," tried to defend Microsoft when it was being sued in the U.S. for anti-trust violations, and helped Wal-Mart with its front group, Working Families for Wal-Mart. Not surprisingly, campaigners for a Kingsnorth-free future have already protested outside the company's London office.

While Edelman's London office has been busy trying to defend what could be the biggest new carbon dioxide emitter in the United Kingdom, Edelman Canada has been gushing about going "carbon neutral" after it landed an account with the David Suzuki Foundation (DSF), an environmental group. Edelman Canada states that it will "provide insights on Quebecer's perceptions of environmental issues and counsel DSF on how to engage them and other decision-makers." (Why the David Suzuki Foundation is hiring a PR firm, let alone one that across the Atlantic is trying to defend the indefensible, is an interesting question in itself.)

Edelman, of course, aims to win both ways. In Canada, it wants to use its work for an environmental group to lure more corporate clients receptive to the company's spiel about facilitating "dialogue" with non-profit groups. ("Dialogue" is PR-speak for divide and conquer.) In the "Corporate Citizenship" section of its global website, Edelman states that it has appointed Alice Hogueisson as Global Environmental Manager "to champion our commitment" to the environment, adding that she will be involved in "reducing Edelman's global energy consumption and decrease our overall CO2 footprint."

Here's a free tip for Alice. Pick up the phone, call the CEO of Edelman UK, Robert Phillips, and tell him to advise E.ON to scrap the Kingsnorth and other coal-fired power station proposals. More importantly, if they don't, drop the E.ON account and issue a media release stating why. With two calls Edelman could help spare the planet several hundred million tonnes of carbon dioxide. And then it could start looking through the rest of its client list, too.

But the odds are that Alice and Robert won't make the calls that they should. If Edelman prefers to take E.ON's money and run a hypocritical line on reducing its carbon footprint, it should at least include the following paragraph in its next corporate social responsibility report:

We changed a few lightbulbs, did a little more video conferencing than we otherwise would have and whacked out a few media releases about how we were going carbon neutral. This made us feel a little better about ourselves and helped make clients feel a bit better about us too. But this was all froth and bubble. It amounted to nothing compared to the hundreds of millions of tonnes of carbon dioxide emissions we helped create when we worked for E.ON defending the proposed Kingsnorth and other coal-fired power stations.

The Guardian is reporting that police confiscated materials found in the protesters' camp. Parliament member Caroline Lucas, who is attending the event, said "A new coal-fired power station at Kingsnorth will most likely prevent the UK from meeting its own C02 targets. Perhaps the police ought to be more worried about this corporate environmental destruction instead of people in a field." More at: http://www.guardian.co.uk/environment/2008/aug/04/kingsnorthclimatecamp.climatechange